Get these gents a TV show

Variety Soup opens with a hilarious Buster Keaton inspired sequence. Black and white film that segues into live action shows Goronwy Thom’s journey from towel-losing swimmer at Brighton to a formally dressed Master of Ceremonies at the Leicester Square theatre. It is such an amusing beginning I fear that productions that start with the performers merely walking on stage will from now on feel staid and unimaginative.

The rest of the show continues the high-laugh quotient with the seven members of Slightly Fat all contributing to the onstage buffoonery. Richard Garaghty and Jon Hicks in particular are able to induce laughter with just an expression but each of the gang is an experienced performer – Herbie Treehead laments throughout that he is forty-six and the others are of a similar age. Given the troupe’s name and the amount of male flesh that is on display over the course of the evening it seems fair to comment on their chosen name. Slightly Fat is a misnomer. At least two of the performers are flattered by the description. At least two suffer an unwarranted calumny. 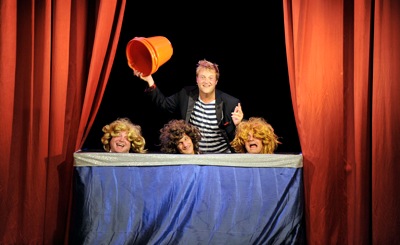 The climax of Find a Lady (photo credit Robbie Jacks)

Gareth Jones gives a masterclass in trust as he allows himself to be wrapped in cling film – in order to become a human butterfly pupa, eventually to be hanging by his feet from the ceiling. If ever a Kid’s, don’t try this at home! warning was necessary it would be during the matinée performances of this sketch. At the 8.40pm show the audience’s laughs turned to silence as the cling film was wrapped more and more tightly around Jones’ head. Never play with plastic bags has been drummed into us ever since we first played with a plastic bag and after a while I was looking around for St John’s Ambulance and feeling uncomfortable that something was about to go horribly wrong. When I was almost certain I was about to witness an onstage death a colleague broke an air hole through the film and the human butterfly could breathe again. He sounded very relieved.

First seen at Edinburgh and other fringe festivals, the production does feel as though it has been lengthened from the usual fringe running length. Some of the sketches are overlong, others could be cut. Performance art is an apt description for the creation of Jon Hick’s Baselitz-style portrait, but though it is clever it needs speeding up as it loses some momentum and has the audience shifting in their seats. A scene with an elephant balancer and Mousetrap-style catapult also felt too long. I would mix up the order, move the optimistic Happy Song to the end of the show and have everyone leave on a rousing, participatory high.

There will be many sketches from the show described at length to friends over Christmas dinner, from the tiny rootin’, tootin’ cowboy to the levitating elephant, tiger training and delightfully obvious Cutting a Man in Half. Circus skills combine with singing dogs, songs, cross-auditorium diablo tricks and much more. One long sketch relies on an audience member dragged onto stage, which can sometimes be disagreeable, but last night Darren got a well-deserved round of applause and his name was chanted in admiration. Particularly amusing is Find the Lady, an absurd, enlarged version of the ancient cups and balls trick. As seen above it utilises orange buckets, wigs and distinctly unfeminine human heads.
Revelling in mistakes, lo-fi production values and physical comedy, Variety Soup is hard to beat for good-natured family-friendly laughs. If you do leave the theatre humming one of Herbie Treehead’s tunes, you can buy the album here. I hope mine arrives before Christmas.

On until 29th December.