Nintendo Entertainment has been the hub of casual video game entertainment since the point in time at which video games began to emerge as being a casual thing at all. However it is not my intent to make an address to casual games as a whole or even Nintendo’s in specific, but rather a facet that is Skateboarding Video Games (and even BMX, ATV, etc. games in general).

The zenith of Skateboarding games was agreeably in the era of consoles that Nintendo’s Gamecube. Unlike the other consoles of that generation, the Gamecube’s discs were quite small in an attempt to make a more compact console, though in the end this means that discs could hold less data and the games generally had lower quality graphics and less complex engines behind them. Skateboarding games flourished in this otherwise hostile environment because environments did not need much detail, physics were consistent, and there were few inputs for the player use (that is, they only had a set number of tricks, stunts, etc.).

Since then, Video Game consoles have come a long way and now boast a wide array of technical abilities making games that were harder to make but guaranteed to sell (i.e. First Person Shooting titles) easy to make but just as easy to sell, so the Skateboarding genre fell out of mainstream use as they were easy to make but either a hit or miss with customers.

Regardless, a few skating titles have come onto the new generation of consoles, namely titles like Skate 2 or Shaun White Snowboarding among them. While never before having much of a reason to dislike those kinds of games often, I had always had a prejudice against Sporting Games like the Madden NFL 20xx titles for the simple reason that they think people are stupid enough to spend Sixty USD on what is little more than a roster update of one’s favorite teams packaged with graphics that will be outdated in a few hundred days; however I decided to try and look past this in Skateboarding games as some of them were just of  nameless patrons skateboarding in urban environments that presented the challenge of using what city gives you and not much else. But then I played one: 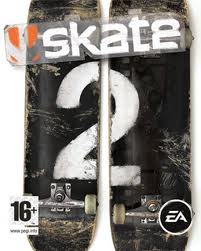 The following is in reference to Skate 2 in particular: While the games give the player a decent amount of free roaming in the city, skateboarding games try to supplement the sandbox style of play with sorts of missions that require to go to a certain place and do a certain trick for money which one uses almost exclusively on costume pieces that hardly enhance the gameplay at all. In addition to that, the concept of using the environment as a blank slate onto which one can work is thrown out the window in that the central hubs of challenges are often local skating parks or backyard pools without water in them. And it was in the latter case that I finally realized what these games were like to me: a fish in a rounded tank. 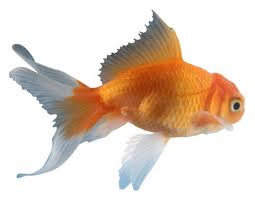 With such a small number of commands that are even used in the missions, the satisfaction of completing a trick is replaced with relief that the long crawl is almost over and the image of a man flying over the lip of concrete bowl performing impressive stunts beyond our own ability is replaced with that of a fish running into the glass side of a rounded bowl, going up it, and then floating back down as act of performing an entire flip becomes as waking up in the morning.

However when talking about this genre of games, one thing that often goes unmentioned is Sega’s Dreamcast title Jet Set Radio. I my self never played many titles for the Dreamcast and heard about this game from a friend who does. After much pushing I finally decided to do some homework on a game which I expected to be as any other shovel-ware skating title. 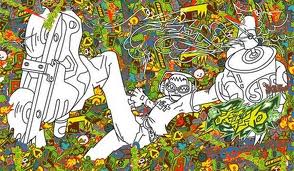 However I was quickly proven wrong of this. What sets Radio apart from other games of its type is the actual shifted objective of it. That is to say, while more contemporary skating titles will have you performing tricks or getting points in arbitrarily challenging ways, Radio’s core gameplay consists of two parts: the first is collecting cans of Sprayable Paint placed about the level, and the second part is traveling to points on the map (referred to commonly as Tag Points) and then moving the controller’s analog sticks as instructed as to tag a wall, billboard, etc. with the paint.

While on the surface the gameplay sounds very shallow and repetitive, Radio keeps the player interested by putting Tag Points in locations that require a good deal of skill to reach, but in different ways. The levels are designed so that there are many ways to get to different points, but every way takes work to use, regardless, and this ends up being a strong take-home point of the experience when the actual challenge is seemingly simple. 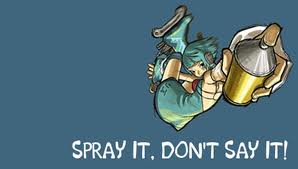