Though Sherpa has been filmed on Mount Everest and has some impressive shots of misty peaks and snowy ice falls it is really a film about industrial relations. The background and characters make it more unusual than a report on a 1970s British Leyland dispute but the basic issues reflect a workers vs shareholders conflict. Here though the two factions are represented by local Sherpas and mountaineering Westerners. 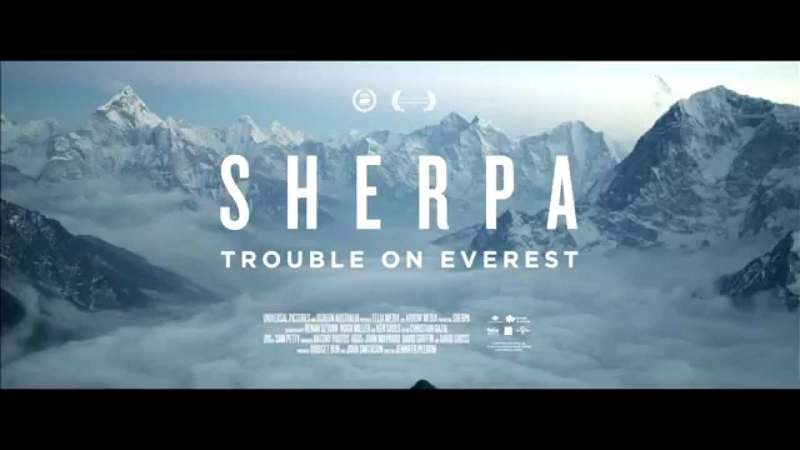 Sherpas are the Nepalese ethnic group that has been involved in guiding climbers up Mount Everest since Tenzing Norgay helped Edmund Hillary reach the summit in 1953. These men know that they have a dangerous occupation, but they have made a financial calculation that the risk is worth the reward. In the eight week climbing season they make ten times the annual Nepalese income.

The film aims to tell its story not from the point of view of the Western tourists, but of the Sherpas themselves. However a Western mountain writer Ed Douglas is used to give the linking narrative thread as the story unfolds. Western expedition organiser Russell Brice also has a large part as we see him struggle in the role of ACAS mediator and CEO, trying to steer a path between the needs of the tourists and the Sherpas. Clearly the final film is very different to that which was planned. Originally the filmmakers were going to follow Sherpa Phurba Tashi as he became the first person to climb the mountain 22 times. But events changed the film’s focus.

Tragedy struck on the mountain, which exacerbated the tensions that were already simmering between Sherpas and Westerners. Amongst the horrors and the difficulties the film makers must have realised that the film they were making had suddenly got much more interesting. They could now film the helicopter arrival of government ministers, the ad hoc meetings of the Sherpas and the disappointment of the Westerners.

The producer denies an anti-Western agenda, and the film tries to remain neutral although the choice of point of view brings with it a degree of anti-Western sentiment. This appears to be ingrained in the Sherpa community and date from the very first ascent and a disgruntlement with the rewards and honours that Tenzing Norgay received relative to the Western climbers.

Some Sherpas behave badly, some Westerners would probably like to re-record their reactions. Others on both sides present an impressively dignified response. Sherpa captures a variety of human responses, all with the backdrop of the terrifyingly uncontrollable Mt Everest. It is a fascinating study of humans in extremis – some by choice, some by necessity – and the difficulty of finding the right response to tragedy.