In 1972, a rock band was formed that would forever change the future of Greenland’s identity. The first band to sing in Greenlandic, they released three albums between 1973 and 1976. 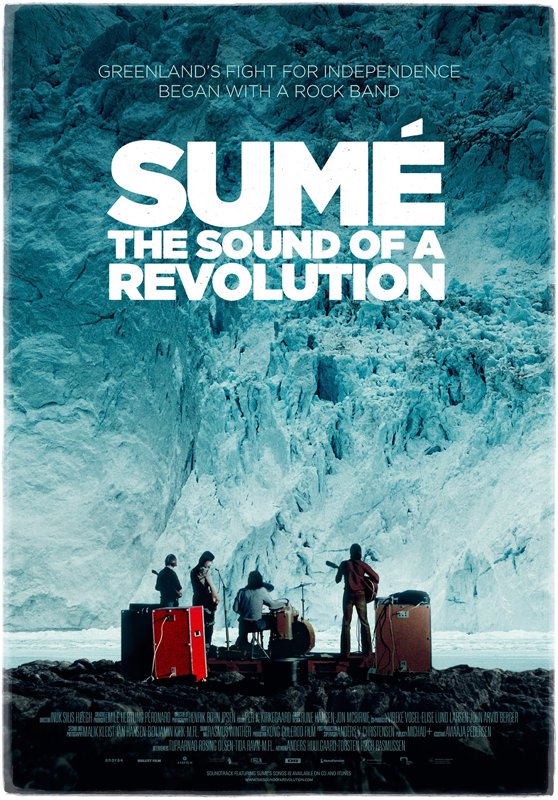 Sumé: The Sound of a Revolution tells the story of Sumé, formed by students studying in Copenhagen, Denmark. Their music came at a politically tense time, offering a voice to many that had long been silent and still serves today as a reminder of the struggles that are yet to be faced. The name, Sumé, means ‘where’ in Greenlandic and sets the scene for the search for an identity.

Using a combination of filmed interviews with members of the band, production team and fans, alongside photographs and stock footage from 1970’s Greenland and Denmark, this documentary recaptures the events that were sparked by Sumé and led to a Greenlandic home ruling Government.

The poetic lyrics portrayed tension, anger, anxiety and fear for Greenland’s identity as a culture, language and people. The songs from their three albums were featured throughout the documentary, highlighting their politically driven motive that sought to rally support together for Greenland’s fight for independence. Accounts from fans portrayed the influence of the Sumé’s music in the 1970’s and the issues faced by Greenlanders living in Denmark. There was a clear air of tension between the two cultures represented through these interviews.

Denmark, a modernised capitalist western country, was the overruling colonial power in force within Greenland. Opinions expressed in the interviews and songs suggest that the feelings of people and society at the time were being captured in these bold lyrics. Labels such as indigenous opposed to civilised and puberty-ridden teenagers opposed to a father figure were given to the Greenlandic people, displaying the influence of the colonial repressive power. Sumé used their music as a voice to fight against these negative representations and give Greenlanders a sense of identity and autonomy again within the all-consuming western world.

Despite holding such a strongly political message, this documentary was far from negative in its approach. There were moments that brought emotion to the foreground, but the focus was mainly on the music itself, which lightened the mood and dominated the screen. It acts as a celebratory tale of inspiration and hope that was given to Greenlanders, but also holds the morals of a cautionary tale, as it is clearly evident that the issues Greenland faces in the modernised world are far from over.

From Sumé’s first song, to their first album cover that featured an Inuit hunter killing a Danish trader they set themselves the political task of regaining a national identity. Music has always been considered a medium in which controversial messages can be stated and the status quo can be questioned and this applies to music worldwide. It is a form of art that freely expresses opinions has done so for many societies. This documentary clearly captures the music and influences of the music on the people.

It is a well-pieced together documentary that echoes universal messages within a globalised world. Further context to the band’s background would have perhaps given further thought to the motives and influences of the band members themselves, but overall this documentary gives a satisfying account of a band that fought for their country’s independence. This makes this documentary particularly poignant, as everyone would be able to find some truth in the music of Sumé.