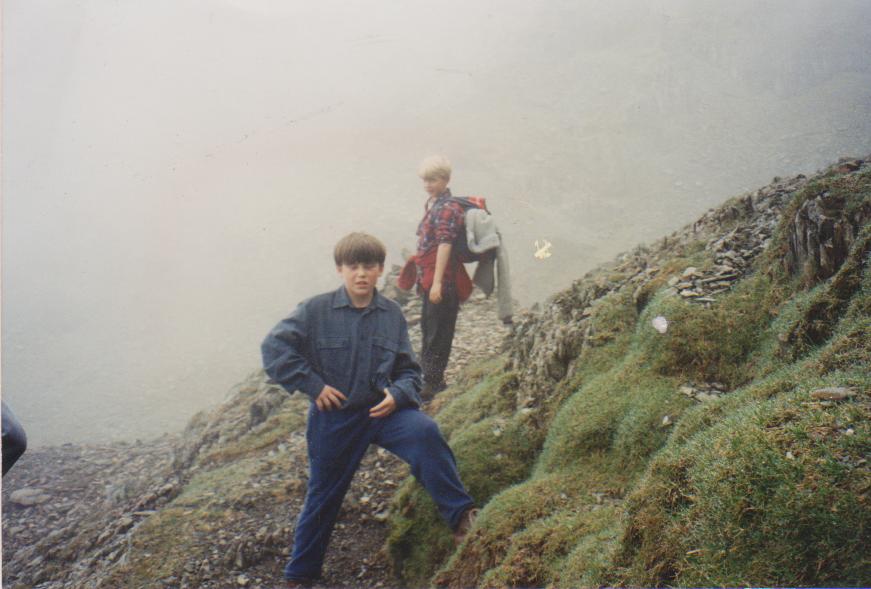 After the divorce, the nineties began.

My father, guilt ridden, took it upon himself to make amends and began taking my younger brother and me on a series of trips around the British Isles. We would go to places of natural beauty, which he hoped would instil in us some of his love of bird watching, ancient history – mainly Celtic and Roman – and a general appreciation for the British Landscape.

We weren’t part of the British landscape tradition. We didn’t know what it was, and we didn’t walk through Peter Ackroyd’s Albion. Our trips were about being within and experiencing something of the natural landscape, an attitude which came about during the 1970s and 80s with the arrival of the festival at Stonehenge, the traveller movement, and the nascent rave scene. I can still recall hearing ‘The Battle of the Beanfield’ for the first time on one of these trips; it all seeped in as static background noise whilst I slept in tent we erected in a field.  I would bore my father, reading through the latest issue of White Dwarf, and recounting tales of orcs, minotaurs, elves, and rat people, whilst my brother preferred to concentrate on West Ham.

This would be the time after the free festival movement had broken down, and prior to the arrival of the Criminal Justice Act not yet passed, a time when anarchical punks had morphed into ravers.

For a good few years throughout this period, my father owned a green and white 1969 Volkswagen camper van, the type with the bay windows. It seemed cavernous at the time, and we would stop in lay-bys en route to Ynys Mon or the Farne Islands, to make beans on toast, a bacon sandwich, and a cup of tea. I would sit perched on one of the van’s steps as it sat motionless, crunching through a bag of Frazzles and watching the traffic speed down the black tar rivers, which, at that time, seemed as much a part of the landscape as the woods, lakes, and mountains. Later we would realise that despite their contentious placement within the natural environment, the roads gave us in our camper van, the freedom to reach the wilderness we so craved; an inherent contradiction in a travelling life. The Volkswagen took us all over the place. Some of the sights we visited have now disappeared, or have merged with other memories of a different geography and time. I have, by all accounts, been in the presence of Gormley’s Angel of the North, and visited Robin Hood’s Bay, though I cannot recall ever seeing them. Years later, we thought we would go there once again, but ended up in Whitby.

I would eat my crisps and drink Orangina, and my father would chain smoke Marlboro Reds and look at the battered AA map. In hindsight, it is tempting to indulge in a pre-SatNav nostalgia. This was at a time when the Dongas Tribe occupied Twyford Down, near Winchester, attempting to stop the construction of the M3 from wiping out the Chalkhill Butterfly. I remember the bird wildlife most; bridled guillemots and razorbills, the oily fulmars, the keening kittiwakes. I remember them dive-bombing, protecting their nests, that kind of thing.

The sites in Kent are more firmly lodged in my memory, and are geographically closer. Pegwell Bay, made famous by William Dyce, where the replica of the Viking longboat still sits, celebrates the first Viking landings in England. The remains of the hoverport lie nearby, somehow far more distant than the Norse remains. Later, I would say it was Ballardian. Other places I do remember vividly. The Scilly Isles out in the Atlantic where migratory birds, alien to the British Isles, were blown ashore seeking temporary sanctuary. Hotels would serve Cornish clotted cream as green anoraked twitchers roamed the island of St Mary’s, telescopes slung over their shoulders like hunters back from a successful trip. We didn’t camp when we were out there, and the helicopter ride from Penzance to reach that tiny archipelago was unforgettable. The trip to the Scilly Isles would have been in ’92, as I was approaching my tenth birthday. That year was notable as a point of crossover for the free festival goer, traveller, and raver, particularly at Castlemorton in Hereford and Worcester, which had followed the success of the Beltane Festival in May that same year. It was the largest gathering of its kind since the Stonehenge Free Festival in 1984. The roads had been clogged up with camper vans and refurbished traveller homes. It signalled a way of life that I ended up, years later, becoming a part of.

In 2009, we camped on Blackheath, buffeted by the wind and driving rain, as part of that year’s Climate Camp. Poets and punk bands reminded us that this was the spot where Wat Tyler’s Peasant’s Revolt had begun, in 1381. We spent a freezing night in the tent, despite it being summer. While we camped, we could not escape our history.

I cannot separate the memories; the things I’ve read in books, the grand sweep of social history across Britain, and the mental images of my brother and I, impossibly young, sitting in a green and white camper van. We sat in that camper van and we grew older. Times changed. We came of age in tents, as nature was cut and butchered around us.

There is a photo of my brother and I, standing near the top of Snowdon with bowl cuts and red faces. So long ago, in the nineties, when we camped in muddy fields and made tea in my father’s camper van, after the divorce.