Degas loved the petit rats who danced for the Paris Opera. He would have enjoyed the English National Ballet’s magical production of The Nutcracker which is brimming with rats both petit and several sizes bigger. 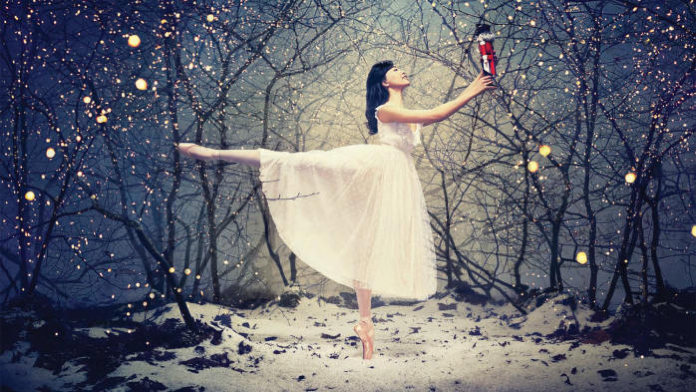 The Nutcracker is a British Christmas tradition up there with turkey, stockings and trying to keep a tree alive in your house without it dropping all its needles, snagging your clothes or toppling over on top of grand-dad. Since the ENB was created in 1950 it has been a central part of the company’s repertoire; the current production is the tenth version since then and dates from 2010. Choreographed by Wayne Eagling and designed by Peter Farmer it returns the action to a late Victorian setting that reflects the date of the ballet’s original creation. Ice skaters on the Thames provide a delightful interlude, creating with falling snow and snowballs the atmosphere that even today we regard as Christmassy, even though if we really had ice skaters on the Thames, falling snow and snowballs it would not be Christmassy but the start of a new ice age.

Over one hundred dancers and musicians are involved in the ENB’s Nutcracker, and a Tuesday matinee (when The Flaneur visited) is a chance for younger dancers to shine. Judging by the excited faces peering out from boxes (and the composition of the lengthy queue for the loos), it is also a chance for little girls to watch their heroes on the stage and get home in time for bed. Hopefully to sleep without the kind of rat-infested dreams they see Clara experiencing.

The plot is of course heavy on imaginative freedom and low on realism – excepting the unfortunate delight the boys take in disrupting the games of the girls in the early house-party scenes. Clara is the little girl given for Christmas a small nutcracker in the shape of a soldier. Freddie is the boy who accidentally breaks it (William Darby in a mischievous mode no doubt based entirely on research and not remotely on how he behaves with his own sisters). In this matinee young Clara’s role is taken by Cheryl Heung who dances with panache and enjoys her moment with the adults on the London stage. Kids make up much of the cast. From the Tring Park School for the Performing Arts they bring enthusiasm, unexpected precision and joyful smiles that have not yet become fixed. The production has small moments of humour throughout the early party scenes, whether Clara getting her hair inexpertly brushed, a smoking-jacketed Michael Coleman using his stick as a gun to play with a child or the way Louise’s three admirers manage – all at once – to share one dance with her.

At night Clara dreams her new nutcracker has come to life. Eloquently danced by Ken Saruhashi he is attacked by a band of rats, ably led by Shevelle Dynott with excited small steps and a tail-swinging enjoyment. (Oh, he’s the baddie! gleefully stage-whispered the chocolate-deprived small girl sitting behind me when he first appeared dancing around Clara’s bed). Katya Khaniukova portrays the elder Clara, continuing the joyful embodiment of the role begun by Heung. She’s never scared of the rats and dances with a passionate relish, fully believing that good will triumph in the end (or having seen The Nutcracker before).

Amongst the second half divertissements the Arabian dance stands out; physically contrasting the strength of Fabian Reimar with the willowy elegance of the four ballerinas. And talking of strength it’s an impressive moment when – with one arm – Fernando Bufala as the Nephew lifts Khaniukova above his head as though her weight is no more than two or three feathers. Misato Tomita’s baton appears feverishly above the pit, the only physical evidence of the English Ballet Philharmonic enjoying Tchaikovsky’s effervescent score.

This production was decried for lacking budget when it began and today is criticised for wanting a lick or two of paint. That’s unfair. It’s no overblown extravaganza – though it features a hot air balloon taking to the skies – but by not messing with genre or setting it’s a nostalgic example of a real 19th century production, when Christmas as we like to celebrate it really began. The rat costumes could be less overtly ratty (the tails are particularly realistic/revolting) and following the story would be easier if the male dancers weren’t at times masked, but it remains a fitting seasonal trip that was enjoyed by over 70,000 people in 2014.

If you have any little ballet lovers amongst your acquaintances they’ll be very grateful for a ticket – and if you want to watch the rehearsals and pretend to be Degas you can sign up as a Patron. Something for everyone. Though try to remember where mummy put the chocolate if you want to keep everyone completely happy.

Children under 5 are not allowed in the auditorium, except for the following family-friendly performances: Mon 4 Jan 2.30pm and Sun 10 Jan 2.30pm. But it’s open season for six year olds.