Trenton Oldfield was today told that his appeal against being deported back to Australia was likely to be allowed and he would be able to remain in the UK with his British wife and child. 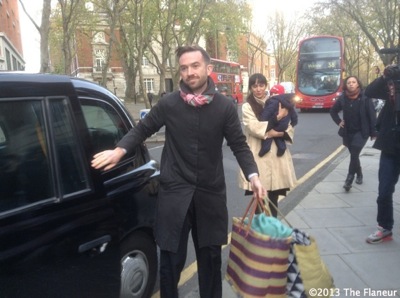 If Oldfield had realised the security level at the court on Rosebery Avenue, he may have brought less bags, but he eventually got through security and made it to court 26, where only ten hand-picked supporters were allowed into the courtroom. The rest remained on the first floor of Taylor House, joshing with a harassed security guard who was concerned with keeping a walk-way through the crowd. ‘Move away from the toilets,’ he ordered at one point, quoting health and safety as the reason for this anti-lavatorial stance.

After a delay Oldfield reappeared, with no result having yet been reached. News filtered through that the prosecution was trying to enforce a requirement for his wife Deepa Naik to earn over £18,000 a year to sponsor him, otherwise transportation, sorry, deportation, would still take place.

Eventually though the hearing ended, with Oldfield able to report that Judge Kevin Moore intended to reverse the Home Secretary’s decision to deport him. Not having had any idea that his 2012 disruption of the Boat Race would put him in jail and threatened with deportation, Oldfield said he had no desire to be involved in similar actions in the future. No doubt his wife will question him more thoroughly in the future if he leaves home wearing a wetsuit.