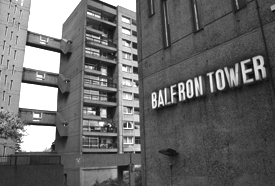 Criss-crossing unfamiliar avenues in an at­tempt to defamiliarise my connection with my home turf; I took the long meandering way…

Like a thread unravelling before me in the streets, walking in Poplar provides a visual provocation between wealth and pov­erty, sleek skyscraper technology and raw un­maintained concrete, American pastiche and British Modernism. This reminds me of the film Sugarhouse (2007). Directed by Gary Love and starring Andy Serkis, it tells a story of a chance encounter between a crack addict from Robin Hood Gardens and a busi­nessman from the City. The stark urban jux­taposition is used as a tapestry, symbolis­ing the collision of the characters’ separate worlds. 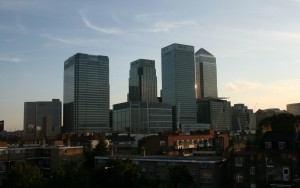 My feet carrying me ever forward, I’m pass­ing through a condensed realm; a cinematic concentration of global montage. Along East India Dock Road away from Balfron Tower (my home), shop fronts and restaurants contract disparate geographies and cultures on one street… Walking through a time corridor, I was barely touching the an­cient traces of a landscape once military and industrial; the corporate towers overhead dom­inate, dwarfing the vestiges of the docklands as it once was.

Sauntering slowly, devoid of purpose, was my best mode of travel. Heading southbound from Balfron, I was caught up in the embrace of an urban Number 7. 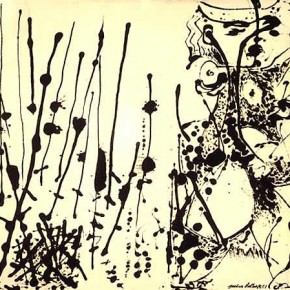 Jackson Pollock’s lovers, al­though sedentary, are an evocation of movement; I imagined the artist’s frame hovering ener­getically above the canvas, dripping paint in Hansel and Gretel style, marking the tracks of his trajectory. Channelling Guy Debord(1) on this walk of free association to reinvigorate my passion for the city, I looked up at this ‘Mini Manhat­tan’, my sight resting on Canary Wharf Tower; its brethren superstructures on all sides.

A powerful symbol of the regeneration of the Docklands, Canary Wharf’s carefully composed spaces marks a clear boundary between it and the surrounding urban sprawl, including the impoverished estates to the north – a flagrant urban contrast. With the lucrative centre of commerce standing lustrous and tall above the degradation, I feel a strong sense of the ‘right’ and ‘wrong’ side of the tracks.

Amplifying the role of process over product – modes of action above a representation of the object, Pollock’s journey is not about arrival but the dance; a performance that is objectified in his crystallised gestures on canvas. Walking along Canary Wharf’s North Colonnade, the left-side of Pollock’s Number 7 springs to mind; straight, directional and punctured by concentration points, these threads of ink are a journey in conceptual space, a translation of my route and the rhythm of my path.

I think about artist and writer David Wojnaro­wicz, writing about walking like a refrain, a beat tapping itself out with his words. Unlike me, he refused to pause; for him, movement was continuous, his prose never tempted by the lure of the full stop(2). I dwell in these abstract pauses, slowing down to contemplate, resting and reflecting temporarily before departing once more, following the thread beneath my feet.

As I walked up and over Poplar station’s bridge above the rail tracks that connect to the city’s centre, the towers got bigger, and so did their signatures; HSBC, CitiBank, Cred­it Suisse, Barclays; corporate branding con­spicuously emblazoned on their facades. Am­bling ever closer, soon I would be too near the tallest structure, Cesar Pelli’s One Can­ada Square, to see its pyramid top.

Past the lunch hour, there is a stark lack of people. I imagined phantom walkers with BlackBerries to hand, their movements brisk and purposive, turning the wheel of fortune and finance in a never-ending dance. Imagining a scramble of lines; strings of past movement stretched out along the pavement, I painted the landscape in my mind’s eye, in Pollock style, pictur­ing something like this canvas.

Like solidi­fied smoke in space, an encapsulation of bod­ies in flux, layer upon layer of routes have traversed this space. Patterns of sinuous and linear curves meandering on the concrete be­fore me unfold in a kinaesthetic place-ballet; like Pollock’s own scores, these marks are the traces of a time-space-routine that is con­tinually repeated, where ghosts move back and forth, numerous and silent, in private streets dressed up as public property. I looked up, for this is the only way to tell which bank headquarters belong to which glass façade. The Royal Observatory beyond the River sprang to mind, another architectural construct urging a craning of the neck to look up at the sky.

(1) Debord, a pioneering figure of the Situationist International (a group of avant-gardes that promoted strategies for urban walking) promulgated the idea that passion could be exhumed from cities through increased pedestrian mobility, bringing together a community of angelic lovers.