It is the 40km of porticos that give Bologna its unique atmosphere. If you are feeling energetic, even in the fiercest storm you can walk under almost 8km of porticos without getting wet from the Porta Maggiore up to the church of St Luke. Why did such long expanses of porticos develop in one city? Other cities had porticos but never to the same extent. In Bologna they are everywhere, grand and simple, protecting the citizens from rain and sun and making the whole city look elegantly different. 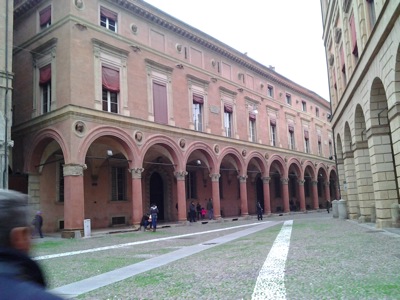 As in other cities the basic development of the portico was a result of upper stories extending outwards to gain more space. At first they were supported by beams that stuck out further than the outside walls, but as the upper stories got wider and higher the owners had to place columns on the pavement to support the first floor. Some of these original, simple porticos remain today. 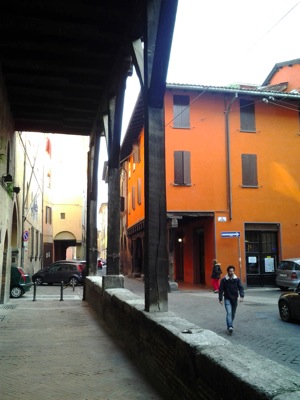 This gives a sense of the utilitarian origin of the portico. Of course this development took place in other cities as well, but there was a legal difference between Bologna and elsewhere that meant porticos developed differently. In other towns the use of pavement columns to strengthen private buildings was banned. Either because it was seen as an encroachment onto public land, or to create wider spaces in the streets. In Bologna however the portico was seen to provide a useful service for the community, protecting citizens from both hot and wet weather. This belief was enshrined in law and a statute was passed in 1288 that insisted upon the creation of porticos along the front of all new buildings. 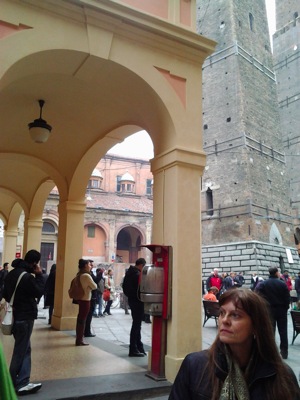 The law was very precise, obliging citizens to keep their porticos well maintained. They also had to measure at least seven feet so that people could ride along them on horseback!  Without a doubt the porticos are the defining feature of Bologna and they give an architectural unity to the town. Just as important, they keep you dry!