Nice of From Kid to offer such a prize for listening! And indeed Professor Brian Cox may want a listen – should anyone crave musical accompaniment for stargazing in line with the good Professor’s exploration of the startlingly brilliant cosmos of which the Earth is such a small part, you could do worse even if you don’t happen to have a direct line to Greenwich or Jodrell Bank. Pick just the right evening, head outside & look to the twinkling spots of light in the sky- not forgetting From Kid through your headphones of course. 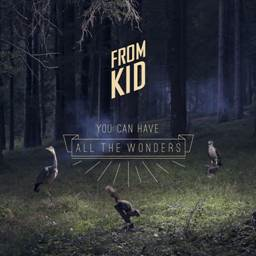 “…the contrast between an urban world and a rich nature” is the theme here, & ”shimmering” guitars should set the tone as well as making for a rather pleasing mental image. Even if it’s not quite what Pythagoras meant in outlining his idea of musica universalis, it’ll do nicely. For is there not something of the night about the whole enterprise? It might not surprise you to learn that Mother Nature has a hand here too, the old girl acting as a muse…

”The ideas for their songs often occur to them when they’re travelling, with the duo’s reactions to their surroundings, the natural world they explore and the people they meet clearly permeating their music. ”. Which might be shorthand for ”expect to hear this in a David Attenborough documentary in the near future”. But to dismiss the likes of Come In as mere background is to miss the point, even if that vocation might serve well. An as live sound permeates, and if Itself isn’t being sung along to by festival crowds one summer in the near future several hats will require eating. That is if they can get over the sensation that Of Kid are performing to everyone – there’s a sense of intimacy which suggests they could be sitting right next to you.

Wonders indeed. And when they promise you the universe, you’d be forgiven for being a little disappointed that it’s not yours to play with already. Have you ever thought what it’s like to be wanderers in the Fourth Dimension? Have you? If not, this is the ideal moment for such pondering. ”If you could touch the alien sand and hear the cries of strange birds, and watch them wheel in another sky, would that satisfy you?” Maybe those very birds are those which ”sing your song” according to Water Flows. Fight fire with stones indeed. Its a big world/universe, so explore to your heart’s content. Free your mind & your spirit will follow…

You can have all the wonders is available 2nd Feb

by Christopher Morley, a citizen of the universe, and a gentleman to boot.