When the writer Frank Cottrell Boyce was asked to name Russell T Davies’ greatest contribution to British television drama, he replied simply “Saving it from extinction.” Certainly, Davies has been behind some of the most influential and transformative dramas of the last two decades, from Queer as Folk to the rebirth of Doctor Who. Now, 16 years after Queer as Folk shook the foundations of televised drama, he’s back again with two new Channel 4 dramas about 21st century sex and relationships – from gay to straight and everything in between. 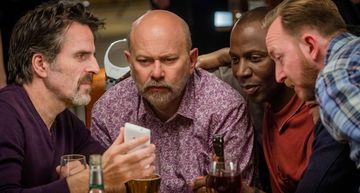 Explain, in a handy, bite-sized vignette, what Cucumber and Banana are all about…

Cucumber is sort of the TV equivalent of a novel, and Banana is a series of short stories relating to some of the more peripheral characters in Cucumber. Cucumber is the story of Henry who’s got a marvellous, wilful, wild streak in him. He wants to live life and get out there and not settle down. And then Banana tells some one-off stories about the people around Henry’s life. People he meets, people he bumps into, even people his sister bumps into in one episode. They’re one-off stories exploring all sorts of different sexualities. Cucumber is very much about the gay middle-aged male experience, in Banana we’ve got younger men, we’ve got women, we’ve got lesbians, we’ve got transsexual stories, we cover the whole gamut, really.

It seems to be partly a rumination on the staidness of middle age. Is that something that you worry about as you approach that stage?

You’re very kind – as I approach it – I’m 51, I’m well into it! To be honest, no. I think it’s much more interesting than that, actually. There’s been a lot of fuss, over the generations, about gay equality, and you can argue, to some extent, that we’re there now. That’s not true for everyone, but nonetheless you could say that, in terms of the law and in terms of certain sections of society, we’re in a rather good state of equality. But my point is that’s just the beginning. Being gay is not just about being equal. Once you begin to achieve equality, then you can start to ask “Who are we?” Every other drama about straight people has been doing this for 2000 years. Who are we? Why do we do what we do? How do we react? What does it mean to be who we are? To be man? To be a woman? So gay drama can just start catching up with that now. We’ve got 2000 years to go. It’s not about being midde aged, as such, it’s about who we are, about what we think, how we react, how we blunder through life, how we succeed, the aspirations we have, stuff that actually hasn’t been explored in drama at all.

Do you see central character Henry as a heroic figure?

Absolutely! I love him! Henry can be contentious, certainly, and puts his foot in it, but I love him for saying and doing the things that we all wish we said and did and are all slightly too boring to actually do. We all spend a lot of the time behaving. Henry’s got partly a wilful streak and partly a marvellous self-destruct button. I love that about him. In any given situation he won’t shut up. Even in a happy situation, he has to provoke people until the situation becomes more interesting. He’s a firestarter. He can’t stop himself from starting little fires and challenging things, and challenging himself, in fairness.

How hands-on are you, once the writing is finished? I get the impression you stay pretty heavily involved throughout.

Yes, I’ve always done that. When I did Doctor Who, I was the show-runner on that, which means kind of running everything. But even before that, going back to Queer as Folk in 1999, working with Nicola Shindler, she’s always encouraged her writers to become part of the production. I do stay, I get involved in choosing the directors and talking to the directors, and the whole team. And I get involved in casting. I don’t have a dictatorial say in it at all, it’s all between me and the director, and Nicola Shindler, and the producer, there’s four of us pitching in on every decision. But that works, there’s room for four opinions. And then every day I watch the rushes, and there are read-throughs and stuff like that. You are across all the casting, even the people with three lines, working in a coffee shop. Because that’s where dramas go wrong, when those little parts are out of sync with the rest of it. But at the same time I like to think I give them an enormous amount of freedom because really, I’ve done my work on the script. You hand over the script and you say “That’s it! That’s the text! That’s what you work from. Good luck.” But you do need to be there to co-ordinate things. If a script says that a room is red, what sort of red is it? Is it like a brothel red, or a sunset red, or a primary red? What does red mean? And everyone reads the script and has a different opinion on it, so you have to be there to explain that you meant sunset red. Otherwise you can get a very different message. When you see a bad drama on telly, it kind of feels like everything hasn’t been co-ordinated. I think I’m there to help, in the end. You appoint brilliant directors –I’m very lucky to be at the high end of drama, where it’s nicely budgeted, it’s being supported by Channel 4 infinitely, you’ve got great directors, great costume people, great designers, so actually a lot of the time you’re just sitting back and enjoying their work.

Is this a follow-up to Queer as Folk?

It’s kind of inevitable, and I’m really happy about that. It’s me, writing about gay men in Manchester, so it’s unashamedly connected. It’s a really different show, but then I’m a completely different person now, and a completely different writer. But of course there are similarities, and I’m happy about that. If you’re going to have a legacy, Queer as Folk is a lovely one. I still love that show, I’m still immensely proud of it and still pleased if anyone’s ever seen it and comments on it. I’m happy to embrace that, I just don’t want people to think that they need to remember what happened in a show 16 years ago in order to watch this. In that respect, the two are totally different shows. This is completely freestanding and starts from scratch in episode one. That’s the only thing I want to make clear. But if you remember it, hooray, I hope you remember it with a big smile on your face.

Queer as Folk was ground-breaking. Did you intend it to be a show that tore down barriers and changed the face of TV drama, or were you just trying to write an entertaining show?

I kind of didn’t assume it would bring down any barriers, because it was a slightly more timid Channel 4 – they showed it at 10:30pm. That was late. Because of that slot, we all assumed it would be invisible. But we made it with a very good heart, and with every intention to be honest and true and to say what I thought were interesting things about gay life. But at 10:30 at night? In the week? We all took a deep breath and thought three people would be watching it. So when it was a success, that was an extraordinary thing. The appetite for that programme, and the joy with which it was welcomed in, which therefore signalled how much we’d been lacking that sort of a programme, that’s what made it a success. We simply worked very hard, and made something I was very proud of, and I’d be very proud of it if no-one had watched it. But it became this big cultural artefact. I’ve got a gold disc. A gold disc! The soundtrack to the show was number one. Of all the awards and things I’ve ever won, that’s the maddest thing of all.

Is it really true that you once presented an episode of Play School?

I did, I once got a job as a Play School presenter. It was supposed to be a full-time job. I did one, which is on the internet somewhere, I think, and walked out of the studio saying “I’m in the wrong job.” I was on the dole at the time. I actually turned down a full-time job. I knew I was on the wrong side of the camera. I did one, loved it, very nice people, very friendly, great fun, and then I walked out and wrote them a letter saying “Thank you for that, I won’t be coming back.”

I have! One of my children’s dramas won a BAFTA last night for best pre-school drama. Here I am, talking about a gay sex drama for Channel 4 – I won the pre-school BAFTA last night, for Old Jack’s Boat: The Christmas Quest, which I wrote as a favour for Bernard Cribbins.

Is there a different approach writing a drama for children to one for adults?

No. You work as hard, there’s no different approach. It’s as simple as using a different voice. If a three-year-old walked into this room, I’d talk to them in a different voice from the one I’m using to talk to you. And I’d use a different one again if my grandmother walked in. I’d be surprised, I suppose, because she’s dead. I’d also wonder what a three-year-old was doing here, come to that. But you modulate your voice, depending on whoever you’re talking to, and writing is exactly the same as that.

Which TV writers do you particularly admire?

I love Sally Wainwright, I loved Happy Valley! I love my old friend Chris Chibnall, and I’m absolutely loving this second series of Broadchurch. My lovely friend Paul Abbott I love. Steven Moffat, my old mate from Doctor Who. And Kay Mellor, of course! That’s enough!

Lots of people take a very snobbish attitude to TV. Why do you think TV is seen as bad whereas radio/theatre etc is good?

Why is that? I think it’s because it’s omnipresent, it’s just there, in the corner of the room, on all the time. So it’s kind of taken for granted, really. It annoys me – I get annoyed when people just dismiss television – but it’s probably a better position to be in than being revered, because then you’re just a false god. It is an extra voice in the room. I love TV, I can sit there watching the next Michael Palin drama, or be equally happy watching Bradley Walsh doing The Chase. If you’re going to start a crusade about TV being taken seriously, there are better crusades to be on. We’re still doing alright. It’s always inventive, and it’s always different, and it’s always changing. I love that about television. You can never quite tell where it’s going to go next.

Cucumber launches on Channel 4 at 9pm on Thursday 22nd January with Banana following at 10pm on E4, and a serving of Tofu at 10.30pm on 4oD