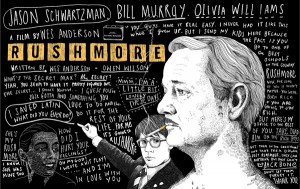 The project looks to reinterpret classic and cult films posters. Much of the modern imagery associated with film marketing contains banal, spliced together pictures of the main actors with no soul or meaning behind it. Strain says ‘I want to create artworks that reflect artistry, skill and the importance of Cinema’.

Peter Strain is an AOI (Association of Illustrators) Critics’ Choice Award-winning illustrator based in Belfast.

He specialises in creating carefully composed, hand-rendered illustration and typography and always tries to experiment with texture and mark-making techniques to keep his work evolving. ?His work is hugely influenced by film and music and aims to tackle social, political and cultural issues with a highly distinctive hand lettering style, bold imagery and humour.