To Mayfair for an Art Perambulation. Darkest February but not so cold that just going outside is an achievement – although we were wearing hats and gloves as we set off from Oxford Circus with the New Exhibitions brochure in hand. This is mostly very informative, but uses such big dots to mark the galleries that it is sometimes hard to tell which streets they are on. However they are nothing compared to the whoppers we’ve used on the map below. 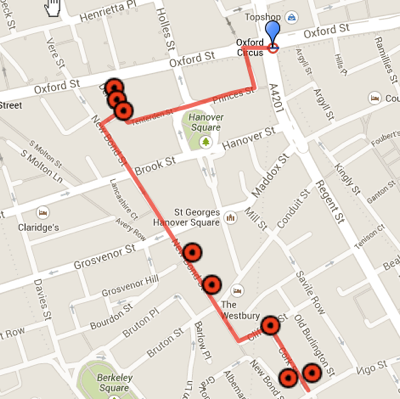 Being an indication of the route taken during the Art Perambulation

These refer – going north to south – to the following galleries – Whitfield, Ronchini, Vigo, New Criteria, Halcyon, Alan Cristea, Waddington Custot and Flowers. Although, just to confuse matters, that’s not the order in which we visited them.

Arriving at the south end of Dering Street we first entered Vigo Gallery where Biggs and Collings were showing Living Creature. These two collaborative artists are grounded in art history – the Collings side of things being Matthew Collings, art critic and TV presenter. Their images are large-scale, juxtapositions of small triangles of colour and texture and it is no surprise that Biggs is a mosaic artist. They have a formula and stick to it, their interest in colour, pattern and repetition filling the gallery with expressively rendered opArt. Within each image there is a symmetry but the hang deliberately works against this. One wall was big enough for two images, but only had one, lopsidedly towards one side of the wall. If Biggs and Collings’ reputation continues to grow I recommend investing in masking tape companies – it looks as though their technique uses a lot of it.

Onward to the Ronchini Gallery, just one shop further up Dering Street. Here the walls are heavy with the object-paintings of Italian artist Paolo Scheggi. Influenced by Fontana, Scheggi’s work have a monumentality and solidity, usually featuring several layers of canvas, each cut with geometric shapes to reveal those below. Monochromatic, one small piece is unusually displayed in the centre of the wall text about the artist and his short life.

Almost next door again are the first floor galleries of Whitfield Fine Art, specialists in Old Master paintings. Their current show was Italian Landscapes from Barocci to Poussin and was a small museum of works from – you may have guessed from the name – Barocci to Poussin. Barocci’s Christ expiring on the Cross was a highlight with its detailed recreation of the Urbino Palazzo Ducale in the background. Historically and geographically inaccurate of course, for even on the clearest of days you’d need very good eyesight to see from Golgotha to even Southern Italy, but Barocci has made it clear to the locals that Christ died for them, even if they were Ghibellines.

New Bond Street beckoned. I wanted to see the Sotheby’s Impressionist and Modern Art exhibition, but on the way we stopped at Other Criteria, Damien Hirst’s boutique art shop. Amongst the butterfly paintings named after world cathedrals a Harland Miller silkscreen jumped out – a Penguin Plays edition claiming the title I am the one I’ve been waiting for. Are you really, Harland? Other Criteria gets full marks for having helpful assistants, but we spent too long looking at the work and were too late for the Sotheby’s show just down the road. Instead we visited the Halcyon gallery at No.29 where Andy Warhol’s print of shoes sparkling with diamond dust compared with Hirst’s diamond encrusted skull we’d seen images of earlier. There’s little new – it’s just laid on thicker. With Bob Dylan images and Warhol-and-lover illustrated doggerel it was a popular show with more people in the gallery than any of those we’d previously visited.

Alan Cristea on the corner of Cork Street was showing a selection of works from big names, including Sol Le Witts with strong diagonals that complemented the Biggs and Collings works at the Vigo. Julian Opie horses and Martin Craig-Martin light boxes demonstrated the fashion for harsh, linear images but it was the soft photogravures of Christine Baumgarten that stood out.

Photographer Michael Wolf’s show at Flowers was the highlight of the whole art perambulation. From his series Architecture of Density the large-scale images again reveal patterns and repetition – here in the horrendously high-rise, high-density buildings of Hong Kong. Patterns and repetition aren’t all that artists are interested in though, as was proved at the final stop of the day, Waddington Custot. Here was the familiar Robert Indiana LOVE sculpture, as seen in JFK Plaza, Philadelphia. It might be much parodied but the original is still worth seeing to experience its youthful enthusiasm.

And so to bed. Or rather, to Oxford Circus, cold and surprised how many galleries were downright shut. But we’ll be back, after a few trips round some of the other arty areas of London.