No one knows who he is.

There has been no one like TheFreeHelpGuy since Sir Percy Blakeney in The Scarlet Pimpernel. OK, he’s is doing less popping over to France to rescue imperilled aristocrats, but he’s in the same business of helping people anonymously. Nobody yet chants, ‘They seek him here, they seek him there, Those Frenchies seek him everywhere,’ but the good news is you don’t have to be one of Baroness Emma Magdolna Rozália Mária Jozefa Borbála ‘Emmuska’ Orczy de Orczi’s Frenchies to get help from the FreeHelpGuy. You just have to ask.

Saturday saw the first of TheFreeHelpGuy’s new project – #Helpmobs, which is the same thing on a bigger scale. Imagine a team of Scarlet Pimpernels, all dashing to Paris in cunning disguise to help out and you have imagined a #HelpMob – apart from the fact it took place in London and there were no cunning disguises.

The call had gone out for anyone who wanted to help out to meet outside the Notting Hill Boots at 11am. Unfortunately there are two branches of Boots in Notting Hill, but once the two mobs that collected had been amalgamated into one big super-mob, they were briefed on the day’s good deed. 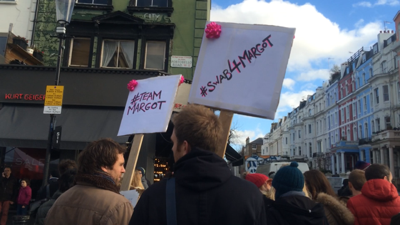 Margot Martini needed help. She is 17 months old, has leukaemia and needs a bone marrow donor urgently. There was a Donor Drive Event nearby, swabbing people and trying to find a match to help Margot. The FreeHelpGuy had printed thousands of flyers and hoped that a concerted effort amongst the crowds of West London would help increase the number of people who turned up to be swabbed. The more people that were swabbed, the more chance there was of finding a match.

If you want a large group of people then Portobello market on a Saturday morning is hard to beat. The HelpMob started along the road, handing out flyers. I haven’t handed out a lot of flyers in my life but I imagine we had it fairly easy – when someone asks you ‘Can you help save a little girl’s life,’ it is a lot harder to resist than ‘10% off your next pizza’ at a local trattoria. People were less keen to take a flyer when I experimented with ‘Have you got any spare bone marrow?’ but gradually the flyers were handed out and people directed to the Donor Drive Event.

So was it successful? We will have to wait for reports on whether Margot has found a donor. But this first HelpMob proved there are people in London who will turn up to help others with no idea what they will be asked to do. A new HelpMob is planned every month, so follow The Free Help Guy or us and you’ll be informed when the next one is.