Eleven years ago I saw Adrian Dunbar’s Philadelphia, Here I Come! at the Millennium Forum in Derry.  At the time I had been working in the arts for about a year and had seen a handful of small shows at the Old Museum Arts Centre.

As a child we didn’t go to the theatre, I didn’t read plays and I certainly hadn’t heard of Brian Friel. I went off for a night in Derry and my first Friel experience.  The show may have been amazing but I couldn’t see it, I didn’t understand it, I couldn’t find a context in which it was relevant to me.  In fact I’d forgotten I’d even seen it until very recently.  I wracked my brain trying to remember the story, the characters, anything about the show that I could talk about if I was asked.  But all I can remember is my first time in Derry, the bar in the Everglades and how long it took to get home.

To all my thespian friends out there, I know this shocks you. Over the past few days I’ve been told ‘It’s the most amazing play ever written’ and ‘he’s the best playwright who ever lived’.  In the back of my head I was wondering what I’d missed.

Last night I went to see Philadelphia, Here I Come!, the Lyric’s 50th Anniversary production, directed by Andrew Flynn.  It started quietly, Stella McCusker’s voice barely audible from the back of the theatre. On a beautiful set, the actors drew me in to Friels’ relatively simple story of a young man with no reason to stay in the small village of Ballybeg.  His father barely speaks to him, the girl he loves has married someone else and the monotony is killing him. 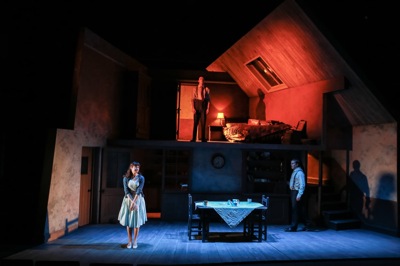 Small moments of melancholy are brought alive by the lighting design, Kate appearing ghostly under blue light as he remembers their moments together and his silly mistake in losing her.  Throughout the production, tiny areas of script are highlighted through the physical design. Subtle changes in lighting density darken the mood, the lamp in the bedroom highlights Gar’s private space and soft lights pick out the table as a symbol of home. These are sometimes barely noticeable but just enough to draw the audience in to the overall feeling of melancholy and loneliness.  The clock ticks time down on the wall as Gar’s time to depart comes closer, the audience drawn in to the countdown until his new life in Philadelphia.

But for me it is the words which jumped out from the stage, the poetic pain of a broken heart, the hopeless sadness of having nothing to look forward to, the inability to feign happiness in a world to which you don’t belong.

The discord between Gar’s two personalities, Gar Private and Gar Public is pronounced.  Gar Private is excitable, forward thinking and dismissive of Gar Public’s sadness. He should look to the future, not to the past. He needs to move forward and stop thinking about home. Gavin Drea gave an outstanding performance as Gar Private, at times humorous and irreverent, his timing was impeccable and he trailed my emotions through the wringer a number of times throughout the performance. I especially thought the pacing between the two Gars worked really well.

When Gar Public was perked up by Gar Private, he never quite got just as excited, as is the norm in real life. Reality never quite matches the fantasy. When Gar Private was pulled down to earth by Gar Public, he matched his sadness. The equilibrium between the two sides of his personality pronounced the melancholy and loneliness and it was at these moments when I could feel my heart breaking.

The relevance of the Gar character/s to my own personality is pronounced. As part of me pushes myself forward, another part of me pulls back.  I fought to leave my background, my closed minded views and my birth culture. But as with Gar Public, I am always drawn to home, to responsibility and to a sense of safeness.  Taking a risk is difficult and scary.  Everyone needs their Gar Private to get them through the fight of leaving something safe behind. This applies to all of us, whether it’s leaving the parental home, breaking up with a partner, applying for a new job or changing religion.

I’ve spent some time thinking about whether Gar actually leaves home for Philadelphia or stays in Ballybeg and I’m guessing it’s subjective.  I don’t think he does, but then I tend not to take risks, I like to play it safe, my need for security and concern for those left behind would win over. Other people would say he does go.  Those people are willing to take risks, to go along with the adventurous part of their personality which propels them forward to try new things. 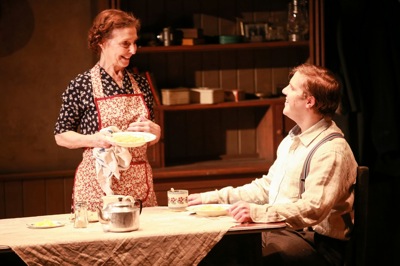 Mark Phelan’s programme note points out the impact of emigration from Ireland and now also immigration to Ireland.  He suggests that “plays like this are classics because their continuing relevance transcends both time and space”.  An audience anywhere is “easily able to identify their own Ballybeg”.  I would take this programme note further and suggest that Friel’s play is not just about physical location or emigration from it. It’s about mental emigration from one view to another, it’s about growing older and forming your own opinion, it’s about breaking away from your family’s customs and culture and finding your own. I would suggest that this is why Friel’s masterpiece is such a relevant play in this time and space in Northern Ireland today. It’s also why I simply didn’t get it when I saw it all those years ago.  I hadn’t broken away from my culture or background, I hadn’t gone to university, I hadn’t gone on the journey of self-discovery which I’ve been on for the past 11 years.

The poetic, dark humour of Friel’s story, his deep understanding of human nature and the direct relevance of his writing to me and my journey has hit me in the heart and I don’t think it will ever let go.

Philadelphia, Here I Come! runs until 8th March on the Danske Bank stage of the Lyric Theatre.