Rubens didn’t just paint fatties. The cracking new show at the Royal Academy is at pains to point out that there were many other elements to his talent. He wasn’t even just an artist – diplomacy and spying were also on his CV. Mixing arts and intrigue at that time didn’t always bring success and long life (cf. Christopher Marlowe) but Peter Paul Rubens not only kept his head, he thrived, was knighted and bought a large country estate near Rotterdam. 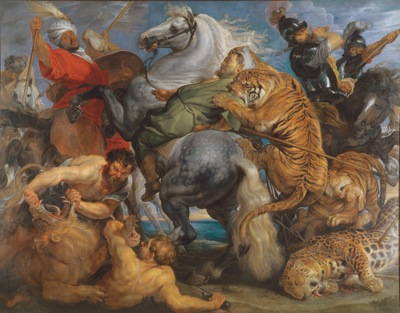 Rubens’ masterpiece Tiger, Lion and Leopard Hunt has made the journey to the RA

Oddly for a Rubens exhibition the first picture I saw in the show looked very much like something by John Constable. After peering at the label I discovered it was by John Constable – a full scale sketch for The Haywain.  This was a shock as I had happily skipped to the RA imagining the masses of Rubens images I was to see. It turned out I hadn’t paid attention to the …and His Legacy part of the exhibition’s Rubens and his Legacy title. These small print additions to exhibition titles are always a worry. They can be cover for eking out a few pictures by the master whose name is being used to sell the show with many others by his followers.

So is the case here. In one room there are 17 pictures, of which one is by Rubens and his workshop, one by Rubens and Jan Brueghel the Elder, and a grand total of, wait for it, one is actually by Rubens alone. To be fair the rest are by chaps like Cezanne, Renoir, Van Dyke and Rembrandt, but the show is heavily skewed towards Legacy rather than Rubens himself. With my gallery-going companion it engendered the exciting new game Spot the Rubens every time we entered a new room.

Curators Nico Van Hout and Arturo Galansino have hung the exhibition to demonstrate links that they have spotted between Rubens’ work and that of immediate followers such as Van Dyke and later artists like Picasso. The show is divided into six broadly defined sections – poetry, elegance, power, compassion, violence and lust. Each looks at one of the areas of Rubens work, showing a few of his pieces and a lot of inspired-bys nearby. It aims to show the way in which Rubensian elements were taken and used by different artists.

In broad terms, the French saw the sensuality and playfulness in his work, whilst the English were inspired by his rural scenes and portraiture. The Flemish appear to have focused on his palette. Sometimes these links are clear and understandable, such as when Watteau’s fêtes gallants are shown near Rubens’ The Garden of Love.  Other times the stated connections feel forced. In the description of one of Constable’s works in the show the curators claim that ‘Constable’s inclusion of a rainbow in compositions such as Cottage at East Bergholt pays conscious homage to Rubens’. As proof of this they have a Rubens picture that also includes a rainbow. This is a claim too far, though co-curator Nico Van Hout even says that without Rubens there would have been ‘no Rococo, no Romanticism, no Orientalism. Perhaps even no Impressionism.’

Much of Rubens work was on the large side and cannot be transported around the world. The famous Marie de Medici cycle of paintings cannot leave the Louvre and is represented here by a small study. A large projection shows the works in situ in Paris, with constantly moving images that I doubt many will watch for long. Similarly The Fall of the Damned also cannot travel and is here in a copy by Jordaens.

Once you are over the shock that most of the work in this Rubens exhibition isn’t by Rubens, the curatorial approach works well, showing the influence of Rubens on the other artists. It makes an interesting and educational stroll through art history. However whilst championing Rubens’ many areas of expertise, the show tries to revise history. It completely downplays the well-known equation: Rubens = hefty-ladies. Peter Paul may have had many other elements to his output, but the fact is that his name is not used to describe rural landscapes or portraits, but rather the sturdier specimens of femininity. Many will leave the exhibition feeling that this sensual area of his work was not adequately covered.

And so the visitor’s path leads directly into the shop and a 1000 piece jigsaw of Tiger, Lion and Leopard Hunt. Rubens was all for copying his works and getting them seen by as many people as possible. Maybe for once he wouldn’t have minded the in-your-face merchandising that always accompanies large exhibitions.