I don’t often leave a concert thinking I’d like to see the score. My attitude is usually more along the lines of Let the orchestra worry about the music, I’ll worry about the interval drinks. But though I understand the basics of how a composer indicates what he wants the musicians to play, how does Shostakovich indicate for a cellist to hit the body of his instrument with his hand? Or for a violinist to slap the music stand with her bow?

A day of Russian culture that started with an Aleksey Balbanov retrospective in Mayfair continued with Yuri Bashmet and the Moscow Soloists performing at the Barbican. In celebration of a year of cultural exchange between Russia and the UK, the instruments being played had been lent by the Glinka National Museum and the Royal Academy of Music. So a programme of Britten, Shostakovich and Tchaikovsky was performed on precious antiques created by masters like Pietro Mantegazza, Mathias Albani and a chap you might have heard of called Antonio Stradivari. A timely reminder of the value of these instruments – a Stradivarius violin has recently been stolen in America and the reward offered for its return is $100,000. 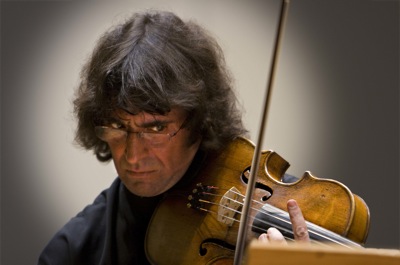 Grammy Award-winning violist Bashmet conducted the orchestra which he had first founded in 1986. Dressed in black with a medallion hanging over his chest he balanced his priceless instrument on a spare chair when not playing. The evening started with Benjamin Britten’s Two Portraits for Strings, short works that the composer wrote when he was only sixteen. Never performed in his lifetime the second was a self-portrait that featured the viola – the instrument that Britten himself played. Influenced by the English pastoral school these pieces are not fully developed but show the composer finding his voice.

Latvian violinist Kristine Balanas joined the orchestra for Schubert’s Rondo of violin and strings, another piece written by a composer in his youth, although what with him dying aged 33, most of Schubert’s music was written in his youth. She played the Royal Academy’s Habeneck violin, made by Stradivari (with possible help from his son Francesco) in Cremona in 1734 – when he was 91. Dressed in a long red gown she enthusiastically embodied the charm and vitality of the light-hearted Rondo. 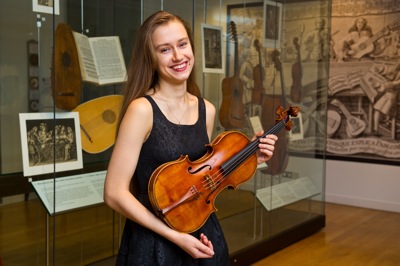 Shostakovich’s Symphony for Viola and strings gave Bashmet a chance to demonstrate his virtuosity. Conducting at times with his bow, other musicians used theirs to slap the music stand or tap their instruments. With high-pitched pizzicato the piece peaked like a murmuration of starlings on a high B flat. Followed by Tchaikovsky’s Souvenir de Florence the audience was delighted when Bashmet played several encores, including Happy Birthday inspired by the Viennese and then Budapest tradition. ‘Wow!’ shouted someone, which probably isn’t encouraged, but summed up the audience’s appreciation.

This concert was the first in over 250 events taking place as part of the UK-Russia year of culture. Find out about more of the events here.