The countdown has started to the joyously elegant Mille Miglia, the Brescia – Roma – Brescia weekend rally for historic cars. Described by Enzo Ferrari as the most beautiful race in the world, the 2016 event is scheduled to take place from 19 to 22 May.

The official list of 440 starters, representing 36 nations from five continents, has just been drawn up and the new route has been announced, varying slightly from the 2015 edition, though like every year it will pass through the historical centres of some of the most fascinating towns in Italy. These 440 masterpieces of design and mechanics, constructed before 1957, will cover approximately 1800 km over Italian roads. As well as these exclusive cars another 150 automobiles – manufactured after 1958 – are taking part – in both the “Ferrari Tribute to Mille Miglia” and the “Mercedes-Benz Mille Miglia Challenge”. 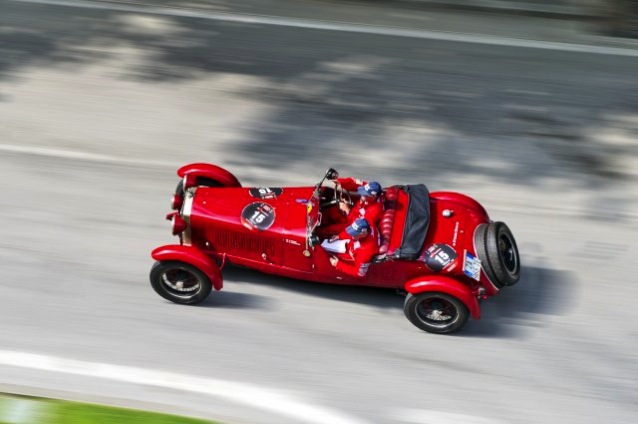 The Mille Miglia is also a highly valued travelling museum. Once a year priceless treasures gather in Brescia. Some come from private collections, others from official museums, including those of Alfa Romeo, Mercedes-Benz, BMW and Porsche.

Among the vehicles taking part this year will be over seventy cars that raced in at least one edition of the Mille Miglia, from 1927 to 1957. One car that is worthy of special mention, is the Ferrari 340 with which Gigi Villoresi won the 1951 edition and an Alfa Romeo 6C 2300 Pescara, that was owned by Benito Mussolini, this car participated in the Mille Miglia in 1936, driven by Ercole Boratto, Il Duce’s driver.

In keeping with the traditions dating back to 1927, the route will begin and end in Brescia, and will travel across half of Italy, with Rome being the point of return. In 2016, Mille Miglia will cover four stages, in four days. 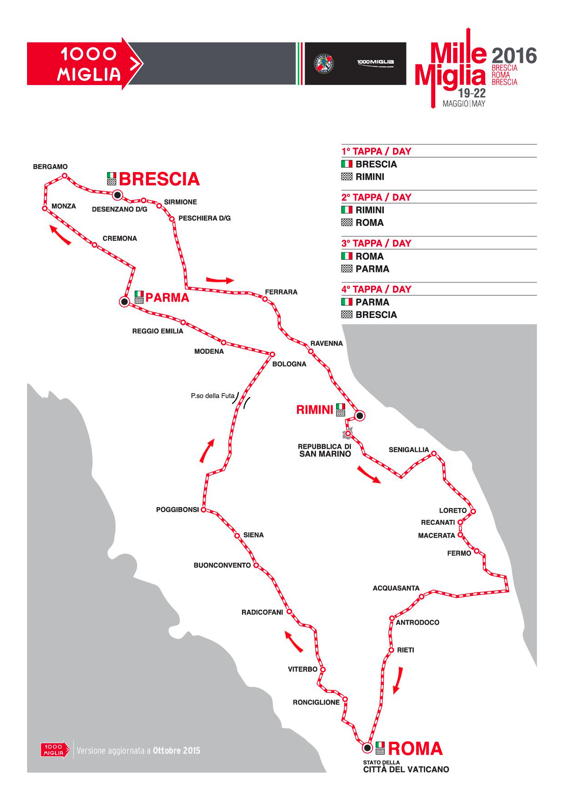 Click the image to see a larger version of the route

The first stage will leave in the early afternoon of Thursday 19 May, after passing through the Sigurtà di Valeggio sul Mincio Garden Park, Ravenna and Ferrara, it will end in Rimini. The second stage, the day after, on Friday 20 May, will have a stopover in Macerata for lunch and in Fermo for events reserved for the modern Ferrari and Mercedes -Benz. As is traditional, the evening of the second stage, a Friday, will see participants arrive in Rome, and as the Jubilee will be running concurrently, some changes will be made to the customary night- time drive in the city centre. On Saturday 16, the route will leave the capital and will be unchanged up to Tuscany, with a break in Poggibonsi. Following checks in Piazzale Michelangelo in Florence, Mille Miglia 2016 will once again tackle the Futa and Raticosa Passes, where epic undertakings were performed by the masters of the steering wheel. The third stage will again end in Parma, which last year gave the participants a particularly warm welcome. From here, the next morning, the participants will return to Brescia, arriving once again at lunch time.?

As always it is going to be an impressive show and it is highly recommended to watch. If you can’t make it, follow the rally here on The Flaneur.