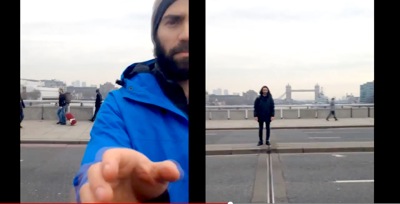 ‘EXCHANGE – Moneyless in the City of London’, is that even possible?! Please, tell us more about your project, how you work together on it and when your collaboration started.

Kevin Biderman: Yes it’s hard to imagine, isn’t it? And if the question you’re asking is can we rid the City of London of money then of course, at present, I would say no. It would take another Boudicca to achieve this.

However I do think it is important to imagine and enact other forms of exchange. We exchange all sorts of things that are not financial… even in the Square Mile. Fredric James said “it’s easier to imagine the end of the world than the end of capitalism.” And of course this is true and those such as Mark Fisher have given us great insight into how this works in practice. But to me this collaborative project was about playing with ways of exchange that are not based around money to, in a very personal way, start to imagine what lays outside the capitalist structure.

I was introduced to Gentil about six months ago by Marq Smith and we soon found we had a shared interest in the situationist movement. After Gentil showed me his wonderful Royal Life series he asked if I would like to start working with him on other performative projects.

We started to meet every Friday in different parts of the City and experiment with performed actions that in some way related to the geographic history of the site we were on. It was important to both of us that we recorded our actions using an everyday object such as a smart phone (which actually belongs to Gentil’s wife). And that the recording device became embedded in the performance itself. I have been researching smart phones as a surveillance device and this surveillance of everyday life also became a part of what we were doing.

Gentil Porto Filho: In fact, the EXCHANGE project is not fully possible since we always need the expensive iphone of my wife to record the actions and some coins for a coffee during the discussions. But even so, we have observed that it is possible to explore the financial center of London as an heterotopic playground. And like in any other playground, money, at the end, is not so important. The project has started some months ago from our conversations around common topics of our research projects, which are being conducted at the Royal College of Art. Usually we bring some ideas to be discussed in some local café, an hour before to transform it in basic procedures for the actions.

Among other societal issues, the EXCHANGE project addresses the notion of value. It focuses on human interactions instead of highlighting the role that objects (physical or digital) play within the work relations the City of London is expression of. Do you see this inversion as central to your project?

GPF: For me, the project could be also imagined as a set of interactions between people, objects and urban spaces without certain value hierarchies as expressed in dichotomies such as subject/object, actor/viewer, private/public and so on. During the actions everything seems “equal”, just as agents of a micro ecology — a critical ecology, we could say, in as much as it does not only attenuates momentaneously such hierarchies but also fosters unpredictable modes of interaction between certain elements of an environment completely submitted by economic demands.

KB: Well I think that where the human stops and the object begins is something that people have been questioning for quite some time. As this work appears in its recorded form it’s hard to completely get way from the objectification that comes along with this. However I think that the space of the everyday is becoming more and more radical. Our mediated interactions are becoming ever more stored observed and dissected (for both commercial and state purposes). And frameworks are more and more set up for us to enact a kind of self-surveillance through social media and mobile digital devices. When you side step this, swerve or move in an unexpected way sometimes you can find spaces which lay outside the norm. For me this is what we were trying to do with the EXCHANGE project.

EXCHANGE explores ‘everyday relations between technology, collectivity and public space’. How would have you described these relations before the project and how has your vision changed after performing your actions? Would you define EXCHANGE as a political project?

KB: In the sense that any negation of capitalism is political then yes it is. But it’s not direct action like UK Uncut, the Occupy movement or what happened with the New Era Estate. And I think it’s important to point this out. I am a big supporter of these movements and they do great work. However much of the political mainstream in the UK is trapped in this ridiculous narrative of austerity, which places economic concerns above social ones. Sometimes it’s incredibly freeing to just break these accepted constructs through surrealist play and absurdity. I don’t think this should be seen as an alternative to direct action struggles, which is where my wariness comes in, in calling this political. However, as James’ comment about imagining the end of capitalism so wonderfully points to, I sometimes feel psychologically blocked when thinking about new ways of being in the 21st century. To me this project is really just an experiment to try to lightly play with the elements you mentioned and shake myself up a bit. What I am interested in are mechanisms of control, their workings and how we accept them. The little actions in the EXCHANGE project can sometimes show me unseen loop holes.

GPF:I think this project raises broad questions on living together in big cities nowadays. But it also represents for me a particular cultural experiment as the works are being undertaken in a city outside my country of origin. It has allowed me to deal with not entirely familiar limits and possibilities of intervention and dialogue. Among some of the aspects that called my attention during the actions is the atmosphere of control and self-isolation in those central locations, which can be perceived not only through the ostensive presence of CCTV cameras, but also through the pure instrumental usage of space by people. Thus, as the EXCHANGE proposes the public involvement of people in a sort of escape from the rules and instrumentalities of everydaylife, the project has indeed a political character. 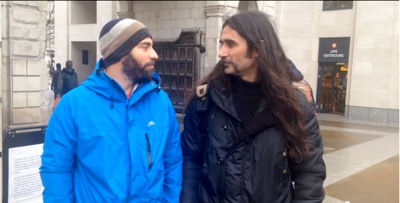 EXCHANGE’s actions happen in public spaces, sometimes involving passers-by, often as mute interactions. Is the choice of silence a way to subvert the idea of communication and interaction in shared contexts? What has the response of the “public” to your actions been so far?

GPF: The prevalence of mute interactions has not been the result of an special decision. Perhaps some interactions have happened in silence simply because there was no need of words to realize specific exchanges. I think language appears in the actions like gestures, as basic means to perform something. The reaction of the passers-by has been in general of an apparent indifference or, when they are invited to participate, of a detached kindness, quite usual in so called developed capitalist spaces.

KB: Before we went people would say to me that there is no way we could film in or around banks and financial institutions in the City. But no one really noticed us. They are so wrapped up in their own existence that we just become another thing to walk around or at the very best to humour. So the big bad City of London police, they ended up filming one of our actions on the smart phone we gave them, just because we asked… and they were bored.

But we are both white men so identity politics plays a part in this too. What would happen if a Muslim woman in a niqab tried to do the same thing? Why are we able to play with the City in these ways when others aren’t?

One New Change Mall – Paternoster Square – London Bridge – Royal bank of Scotland (Black Friday) – Bank of England. These are the documented interventions we can see on the project website. Have you been working on new ones? Is EXCHANGE an ongoing project, and – if you have been thinking about it – how do you envision its end?

KB: EXCHANGE is ongoing yes. Part of the project is to find threads that don’t appear initially, but only after a time of reflection. So we have done five actions and then we let them settle a little and come back for more. I’d be happy to keep doing these for the foreseeable future. I think it’s a good way to remind myself that the City of London is a space like any other. It has council estates, pound shops but also houses the framework of our socio-economic power structure. I feel like this work is a very gentile poke to let myself know this site is not impenetrable.

Saskia Sassen talks about predatory formation rather than focusing on the individuals. As she says we could kill all the rich people but what good would that do. The systemic issues would still exist and rear their heads as they have in the past. So we need to continually find new ways to challange the narratives that guide these social formations. At the moment I’m happy to use EXCHANGE to help me develop minor insights into the everyday which may spark further ideas.

GPF:As Kevin said, EXCHANGE is an ongoing project and we are indeed discussing some ideas about new actions. We have not prestablished the way it will be ended, but it is easy to suppose that the project should be concluded when I have finished my current research in London and go back to Brazil (as the project has been defined by tangible and immediate interactions within a concrete urban space). However, I don’t think it is impossible to envisage possible unfoldings of the project even remotely.

A final question. What other projects or plans do you have for the rest of this year?

GPF: According to my schedule, I should conclude my post-doctorate until August. My research project also foresees artistic works, which are already in progress as a series of videos regularly uploaded in Youtube under the title Royal Life. After that, I should retake my work as professor at the Federal University of Pernambuco, in Brazil, and prepare a publication on my works in London.

KB: Well I’m in the middle of researching a study on visual surveillance within the City of London in which I draw out correlations between technology, power structures and methods of coercive control. To do this I’m examining embodied interactions with smart phones and positioning them as a surveillance technology and comparing their use to that of CCTV. I want to explore how specular control is used to create the architecture of self-surveillance.