White English men, who run the Arts, make themselves feel better about the fact by reading the right papers, saying the right things, and appointing a token few of the right people to their boards (though they mostly just appoint each other). With narrow vision and epic condescension they may from time to time commission a black Henry V, or a female Hamlet, for people like themselves to watch approvingly – though when did you last see an Arab Othello, or a Middle-Eastern Cleopatra, let alone a predominantly Indian cast or audience?  And this when there are 4.2 million Britons (more than twice the black population of the country) with heritage from the sub-continent, a region with a tradition of great play-writing a thousand years older than England.  Which leads me to Macbeth, or should I say ‘the Indian play’, for so it is brilliantly re-interpreted by Tara Arts and Black Theatre Live in a new collaboration.  An all-Asian cast delivers a version of Shakespeare’s dark masterpiece that feels so naturally Anglo-Indian that it would have Alex Salmond spluttering into his neeps and tatties. 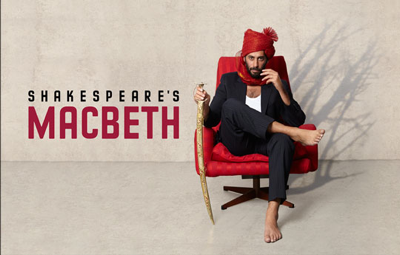 Though sometimes a little ragged around the edges, the editing, choreography and performances drive the action forward at such a compelling speed that the (genuinely broad) audience sat on the edge of their seats and even your jaded reviewer felt he was seeing the play for the first time.  The rhythm of the live Indian drumming and the blank verse of the speeches fused into a vital energy that never let the pace flag for a moment.  The modern Indian costumes and balletic martial arts didn’t distract at all and the depiction of the witches as Hijras (India’s third gender and long associated with ceremony and magic) was a masterstroke.  Mischievous, macabre and suitably bearded, they delivered ‘Double double, toil and trouble’ as a brilliant bhangra chorus.  Robert Mountford’s magnificent Macbeth is doomed from the moment he sees them, even without the murdering ministries of Shaheen Khan as his sinister but all-too plausible wife.  Umar Pasha’s avenging Macduff has real depth and the horror of the violence against his family has rarely been more powerfully portrayed.  Amongst the rest of a strong cast special mention must go to Shalini Peiris who doubles as an intensely tragic Lady MacDuff and a wonderfully comic Porter.

In all this is a very intelligent production.  My only criticism of Jatinder Verma’s compelling interpretation is that, for me, this is a play about power, not (as he argues) about family: there are other plays about ambition and murder in a family – I look forward to a Tara Richard III set in contemporary multi-racial Leicester (or indeed a white RSC production of one of the ancient Indian works of Kalidasa).  But this is a minor quibble given the triumph of Verma’s main argument about Anglo-Asian cultural identity and his worry that ‘purity of culture is synonymous with purity of evil’.  Here is a triumph of cultural fusion in the performance of a great play from a Britain whose history, fabric and future is necessarily culturally-mixed.  If only those running this country’s arts could stop guiltily obsessing about where they come from and start thinking positively about where we’re going.