Twitter changed the way the world created and consumed written media. Now Periscope is set to do the same for broadcasting. Anyone with an iphone can download the free app and easily start broadcasting immediately. All you need is a Twitter account. The big outside broadcast vans that the BBC and large TV companies park up outside live events are no longer needed. Citizen news can be live, from the spot. 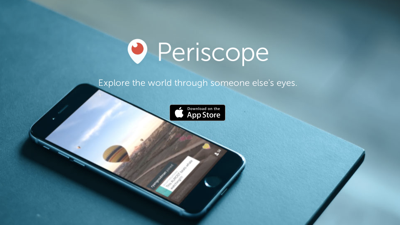 The potential is obvious. At the moment it is very earlier days and people are experimenting. One recent broadcast was of a a cat falling asleep. It had viewers. A young child’s rather unmagic magic trick quickly got 26 viewers. These uses may be inane, but they indicate what will be possible as Periscope is used to immediately spread news and information around the world. Uncensored, unedited.

There are issues of course. Batteries are drained quickly. There isn’t yet an obvious way of tagging you broadcast – viewers just have to stumble across it. It’s so early in Periscope’s life that sometimes the message The world isn’t broadcasting appears. I’ve tried to join a broadcast and received the message broadcast full, which doesn’t happen often when watching regular TV. But this is the future of broadcasting. The Flaneur is aboard. We’ll be live broadcasting from art and culture events in London and on our travels. Get Periscope here and if you want to follow The Flaneur search for Flaneur.