The William Benington Gallery, Islington, focuses on emerging artists from the UK. They are keen to capture artists at a turning point in their career when they are excited about an idea. The gallery’s aim is to provide space and support permitting them to take the necessary risks to allow this idea to come to fruition. 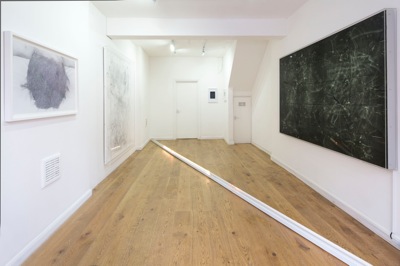 William Mackrell’s predominantly monochromatic exhibition Touch & Go is based around themes of time, sleep and restlessness. But there’s no time for dozing as you almost trip over the first piece The lamps will go out as they should no doubt. Flickering strip-lighting, which has seen better days, is laid out diagonally across the small gallery floor making the viewer consciously move around. You become aware of your body and how it travels around the space while contemplating the unstoppable, inevitable passing of time. 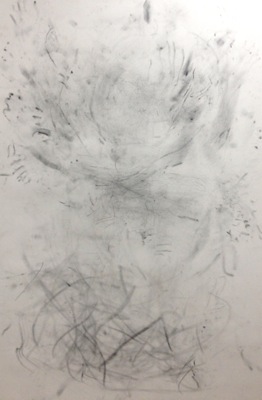 Physicality may not be something you first think of when you see the static framed artwork which accompany the strip-lighting. However, each piece is born out of the body and its senses. Sleep – Positive and Sleep – Negative were created by carbon paper being placed under the sheets of the artist’s bed where his body’s movements from his subconscious mind could be traced.

The only coloured piece is Soprano for Sleep Time App in which Mackrell uses his creativity in a similar way but propels his idea forward offering another dimension. Placing and iPad under his pillow to record his sleep patterns, Mackrell presents a graph which comprises of musical notations. During the private view a singer performed the piece. A recording of the performance will be displayed in the gallery potentially as vinyl. It currently includes background noise and it’s being decided whether it offers more in its original state or whether it’s solely the performance which is the vital element and therefore the piece should be presented cleaned.

Performance and physicality (and slight eccentricity) was a part of Mackrell’s previous artistic endeavours too. When he worked with a partner they rolled an enormous piece of clay to the gallery where it was to be exhibited. On its travels the clay reduced in size until it arrived at the gallery a mere fraction of how it began.

His other exhibits include: an etching of the top of his head – a place one doesn’t usually see. Every hair has been painstakingly crafted from a photograph; a lipstick smear where the artist positioned his lips at his exact height and placed a lipstick mark in the top corner. He dragged and smeared his lips diagonally down a piece of paper, again using senses and his body in his art.

In this exhibition the Mackrell exposes and expresses himself through his body, his senses, his thoughts – both conscious and not. In doing this he makes us think and question our own body and our relationship to it. We have to use all our senses to view this exhibition, Mackrell forces us. He explores themes we are all familiar with and can relate to making it an individual and a collective experience.