Justin Coombe’s exhibition at the Paradise Row Gallery, Halcyon Song, was a compelling series of photo-text vignettes which told the story of a female Kingfisher on her search along the Regent’s Canal for a nesting site. I spoke with Justin about the relationship between art and literature, words and images. 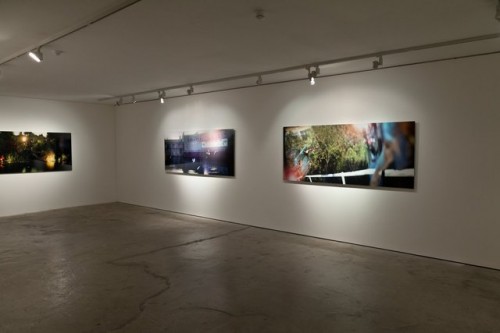 FB: The way the exhibition has been curated means that the viewer need not relate sonnet to image. We can read the poems in series, and then turn and view the images. Is there a particular reason for this?

JC: The installation as it stands is the closest I feel I could come in this instance to finding an equivalent to the book form. It is itself an edited version of the book of the same name. Why not simply place the texts side by side with the images? Because this would suggest that the works are somehow ‘diptychs’ or collages, which they are not. I do not want the viewer to be able to take in both image and text in a simultaneous viewing.  What I am trying to encourage is a readiness in the viewer/reader to hold the spirit of a poem in their head whilst they look at the image to which it relates, and for this process to happen in reverse also: to have the image hover in their mind whilst they read its attendant poem. This happens quite naturally in the Halcyon Song book, by the way I sequence images and texts over a number of pages: each poem is followed on the subsequent double page spread by the image that completes the work. Obviously, in the spatial form of an exhibition, one cannot dictate a sense of sequence quite so readily. But with the aid of the gallery plan, the viewer can see that the sonnets form a sequence from left to right: that their counterpart photographs, both sonnet and picture, have the same titles. So they can be ‘read’ as purely textual or visual sequences, but in the same way a reader might flick though a book or read it in reverse should they choose, the installation prompts them to perform a kind of physical and mental dance: between the images on the wall and their counterpart texts and back again.

FB: Do you think there is a relationship, a kind of harmony perhaps, between visual languages and written languages? Do you work on the basis of this, or are you looking for moments of discord?

JC: There is undoubtedly both a harmony and disharmony between visual and written languages. I am looking for both of those moments. I think in my best works, a kind of awkwardness, in composition, in wording, assumes a strange kind of beauty of its own.

FB: The Halcyon is a mythical bird, in the photo-text vignette ‘Ghost at the Feast’ you also reference Coleridge’s Albatross, what significance do birds have for you?

JC: The greatest significance of birds for me at the moment is that I hate them! I suffer from insomnia and the blackbirds and starlings in the tree near my bedroom window wake me too early each day. But birds hold a great mytho-poetic significance for me. I like to tap into historical or mythical uses of creatures and try to blend those uses into my own personal mythology. The ‘halcyon’ of Halcyon Song is both the bird of mythology and an improvisation upon, a fictionalisation of, a real person in my life. 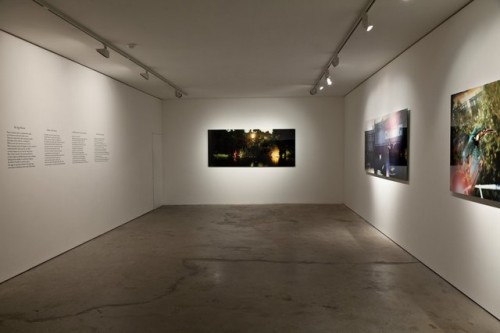 FB: Can you explain your aesthetic of the urban pastoral?

JC: As is the case with my use of bird iconography, I see the ‘urban pastoral’ aesthetic as being very well worn territory, especially in photography, which is an urban medium that often tries to work against its urbanity. But that is part of its pull for me. When you work with cliché, there is room to lose yourself in certain histories and hopefully regenerate or renew them. I made a series four years ago called ‘Urban Pastoral’ which transposed memories I had of my childhood in the country into contemporary city scenes. For me personally, the transition from the ‘pastoral’ of childhood innocence to the hardness of urban life has been a literal one, and like many London dwellers, I have a love-hate relationship to the city. This transition from the pastoral to the urban has often been invoked in literature as a metaphor for growing up. There is a pain in acknowledging that we have lost the pastoral that many of us had in childhood, but one must acknowledge it, and continue to look for the pastoral, the Edenic, within the adult world.

FB: What’s the significance of the location of your Halcyon story, Regent’s Canal?

JC: Regents Canal covers my journey from my flat to my studio, a journey I of course make quite regularly. Around the time I first conceived of Halcyon Song I was reading Joyce’s Ulysses and wanted to make a project that described a daily, familiar journey of some sort. From this I developed the idea of the kingfisher’s search for a nest taking place over the course of a day, and this itself being a microcosm of her world and a longer term search for home and for meaning.

FB: Do you think the same kinds of things inspire you visually in your photographs and your writing? Light, reflections on water?

JC: Yes and no. I think one of the qualities that make my art interesting, flawed, and self-regenerating is this: I often try to achieve the impossible, for example, to capture a mood in a photograph I am staging that can only ever exist at the level of the phrase that has inspired it. Both photography and writing seem well suited to finding reflections and echoes: of the past; of history, and of desire.