You can probably work out what and where the Louvre-Lens museum is from its name, so I won’t bother adding that it is an outpost of the Louvre in a town called Lens. This museum in Northern France is not on the same scale as its parent, which is good news for anyone who has ever suffered gallery fatigue from one too many Baroque paintings or a surfeit of statues. The original Louvre in Paris has 35,000 items on display, a number which makes it hard to see everything in one afternoon. The Louvre-Lens has a much more manageable 205 objects in its main Galerie du Temps.

These are displayed chronologically, with works divided into three main sections – Antiquity, Middle Ages and Modern Times. Modern Times is a bit of a misnomer – it covers from the Renaissance to a very precise 1848 – the date that divides the collections of the Louvre and Paris’s Musee d’Orsay.

Rather than being a converted palace the building has been recently built to display the work. Open since December 2012 it is a success; the way the work is shown is impressive and should be attempted by other museums. Rather than room after room of themed, densely hung exhibits, the whole Galerie du Temps is displayed in one very big room, of a size where the description aircraft hangar can legitimately be used. 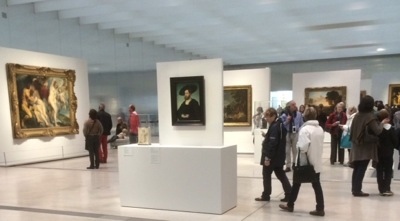 There is nothing actually hung on the main structural walls. Instead everything is displayed on temporary walls and display units within the space. Works in different media are shown together and instead of there being one route through the museum you are free to wander as you wish.

The hang works very well, being hugely helped by the cherry-picking of pieces that has been possible. If you have 35,000 pieces to chose from (or 34,999 as Mona Lisa is unlikely to make the journey) it is easy to chose 205 of great quality.

Masterpieces of every genre have been chosen, yet the space has not been overfilled. Big names on display include a Raphael self-portrait, an El Greco portrait, a Sevres plate, Meissen porcelain, a Reubens and a Rembrandt. But the hang also reinvigorates less famous works with its unexpected juxtapositions of sculptures and paintings. Works from 3500BC to 1848AD are all visible in one room, making for an exciting visit that doesn’t need a map.

Although it is located in the Nord-Pas de Calais, the Louvre Lens is not a provincial museum of local archaeological finds, a disputed Fragonard and portraits of every mayor since 1660. It lives up to its Louvre billing and is well worth visiting. Add it to your next French holiday, or plan a trip just to see it.

Entry to the Galerie du Temps is currently free. Other exhibitions may be payable.

A new temporary exhibition dedicated to the ‘Disasters of War’ will take place from 28 May – 6 October 2014 and costs €9.

More information about the Louvre-Lens

The Flaneur travelled to the Louvre-Lens with My Ferry Link