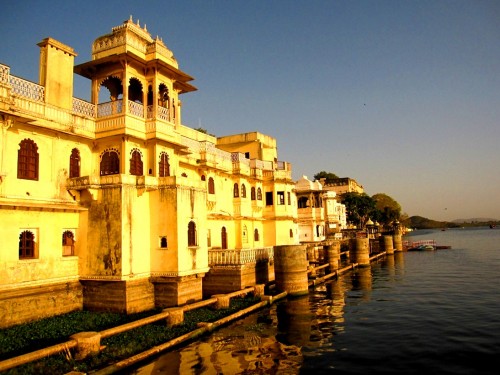 Udaipur wasn’t called the Venice of the East without a reason. The diamonds of reflections cast upon the placid, ever expanding Lake Pichola and the shadows that play on the yellow walls of Bagore Ki Haveli Museum have struck the romantic chords of lovers’ bliss in the past and a lonely man’s philosophical pondering. An ancient city that once stood so mightily in the Rajput era now has her stories told through the colourful spectrums of miniature paintings by artisans who spend their lifetime deeply embedded with rich Rajasthani traditions. She is the mother of wonders, this Udaipur woman. And I am one of those fortunate ones who found the sought after opportunity to bear witness of the grandeur with my very own eyes.

It was the beginning of April when I set my foot on the land founded by Maharana Udai Singh II. The dusty heat blown from the desert of Rajasthan had left me in a pool of sweat, forcing me to drown myself in long, cold showers after every fulfilled moment of exploration. I spent my two nights in the comfort of Lakeshore Guest House, located south of Hanuman Ghat overlooking the city and palace across the narrowest part of the lake. Apart from having a room with a fantastic view of the lake at a reasonable price (due to low season), the warm personality of Hussein, the hotel manager was what made my stay a memorable one.

My first ride through the Rajasthani culture began with a folk dance known as Ghoomar. As the women twirled in circles on the top floor of Bagore Ki Haveli Museum, the dramatic splash of colours from their flowing Ghaghara had effortlessly put me in a trance. The eloquence of their every grace has been carefully passed down from their mothers of different generations, proudly presented to us on that evening.

As early as the next day’s sunrise, I took a walk to the City Palace; a complex formed by a massive gathering of buildings borne out from various Maharajas of different times. This largest palace in Rajasthan which was first constructed by the city’s founder himself contains the lavish intricacies of miniatures, mosaics and glass and mirror work. It was no surprise when the architectural fusion of the Rajasthani-Mughal built on top of the hill that lets out an extensive view of the whole lake has once been featured in the James Bond film Octopussy back in 1983. The gleaming white colour on the walls and the Pichola Lake with mountainous surroundings which served as the backdrop have given me a slight impression of the Greek islands.

It was rather unfortunate for me to not be able to visit Jaisalmer due to the limited time I had and so, I substituted the Great Thar Desert with Shilpgram instead, which I knew pales in comparison. About 3km away from west of Udaipur, the crafts village holds some of the largest annual crafts fair in India. The camel I rode brought me to various groups of performers hailing from Rajasthan, Gujarat, Goa and Maharashtra, as I watched them dance and play music in accordance with where they originate from. Growing up with a strong inclination towards the arts, it didn’t feel right to leave the place without getting something that reminds me of its life. A few bargains here and there and I managed to score one of those miniature paintings which I’ve been eyeing since my arrival at the price I wanted.

“Are you married, Sydrah?” Asked one of the artisans as I handed him the Rupees.

“May you have a good husband one day,” he smiled.

That picture has been hung on my bedroom wall ever since. There were a lot more occurrences throughout the three days I’ve spent but I shall let them remain in the pages of my personal travel notebook. All I can say is, it’s too easy to fall in love with romantic city Udaipur and a little too complicated to leave her.