Oslo’s coolest bar venue is the setting of quite an unexpected union. Ice artists from ICEHOTEL briefly leave “the office” in Jukkasjärvi  in order to join forces with some of Norway’s most prominent street artists. The result is the new interior of the capital’s coolest bar venue – ICEBAR BY ICEHOTEL Oslo. 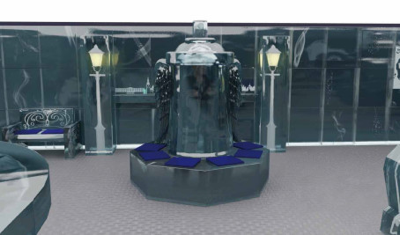 The interior in this permanent ice bar is changed once every year, and this year’s reincarnation is suitably called “Freeze”. The concept and the name is inspired by the qualities of ice as well as the classic break dance movement with the same name.

The names behind the design are Swedish artists Sofi Routsalainen and Mikael “Nille” Nilsson from ICEHOTEL Art & Design group, and Oslo-based street artists André Eriksen and Lars Undli. Light designer André Gulliksen had the illuminating task of lighting design. Gulliksen has previously made light installations for ICEHOTEL as well as for ICEBAR BY ICEHOTEL in Stockholm among other cities.

Artist Mikael “Nille” Nilsson, ICEHOTEL, says about the design concept: “We want to capture an urban moment of Oslo frozen in time – interpreted through the eyes of a street artist. Graffiti is an interesting concept to work with because of its untamed expressions, and often with plenty of political and humorous undertones. Combining it with the pure, natural features of Torne River ice transforms its look completely.”

The new bar interior brings to mind a street artist’s studio, with subway features, traffic indicators, escalators and tags. A central feature in the bar is a man-size spray can which is hollowed out so customers can get a photo of themselves inside the can.

The planning phase of the project was managed between Oslo and Jukkasjärvi mostly via email and Skype meetings. The ice modules destined for the Norwegian capital have been prepared as much as possible at the site of ICEHOTEL where there are facilities and equipment that are needed for some of the more large-scale tasks in the design. The final details will be finished on-site in Oslo. Enjoy!

ICEBAR BY ICEHOTEL Oslo is the world’s first permanent ice bar and holds a constant temperature is -5 degrees Celsius all year round.  The venue is located at Kristian IV’s gate 12, open Monday – Saturday. The new interior will be celebrated with a launch party on 25 April.