Annoyingly for everyone but Shakespeare scholars there isn’t one definitive Hamlet.  The version most often regarded as standard was published in 1604, but a year earlier another version had appeared. Known as the First Quarto it is two hours shorter than the more well known script. But what exactly is it? An early draft? A pilfered copy? The version used by actors before Shakespeare put together a longer director’s cut meant mostly for reading?  Most experts see it as a pirated version, a kind of Hamlet: the bits I remember, pieced together from the memories of an actor who had been in the longer production. Historical commentators have claimed that it works better as a performance than the usual version and now there is the chance to judge for yourself. Ilissos theatre are currently performing what they describe as The mysterious first text of William Shakespeare’s Hamlet at the Cockpit theatre in Marylebone. 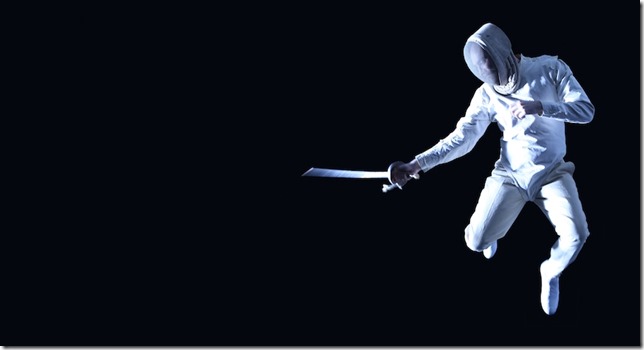 Directed by Charles Ward the eleven strong cast produce a tight, exhilarating revenge tragedy with touches of humour (this is a Hamlet who is learning the bagpipes). Elsinore is recreated with just three low tables, moved in careful synchronisation by the cast – sometimes piled high, sometimes upside-down, becoming a barricade, grave or castle wall. This affects the flow of the script but does energise the space.

Nicholas Limm as Hamlet is a young mixture of physically enthusiastic mountain goat, jumping about the stage furniture and black polo-necked aesthete. His expressive hands play nervously with his sword;  he excels in the long scene reacting to the ghostly messages of his father. The part lacks the introspection we are used to and allows more possibility that Hamlet is deranged, deluded and making it all up.

Much of the longer version of Hamlet  is either cut (if this is an acting script), forgotten (if it is the memories of an actor) or hadn’t yet been written (if it is a first draft) and the story flies by without side-tracking or subplots.  Motivations are less clear and the language has not been sprinkled with genius (here we have that father dead lost his rather than the more elegant that father lost lost his).

The costumes by Ivan Alexander Todorov have most characters wearing breeches made of contemporary trousers. So Hamlet’s uncle parades about the stage in a pair of what are basically Levi plus fours. An unusual get up for any historical period, it almost works (apart from that off-putting back-pocket red tab) although you might spend too much time pondering the significance of Gilderstone’s long trousers.

Polonius is not yet called Polonius. He goes by the name of Corambis, but it’s clearly the same fellow and John Hyatt nails him as a pompous, forgetful windbag. Maryam Grace is one to watch as Ofelia, changing from demure maiden to singing rocker. Everything peaks in an exuberant fight scene well choreographed by Ronin Taylor.

You might think that The Tragicall Historie of Hamlet, Prince of Denmarke  is  a curiosity, best left to hardened Shakespearians who are au fait with every nuance of Hamlet’s text. Almost certainly not a first draft, it feels like a swash-buckling script put on to keep the masses happy when they’d run out of bread and circuses. It’s Hamlet, but with fewer glances left and right, still heavy on revenge but light on psychology.

If you’ve just been watching the cricket world cup think of this as a Biff, bash, bosh Twenty20 Hamlet, hitting all the main plot points without finesse. It’s a rollicking journey through the usual Hamlet themes and quotations and though lacking psychological depth works best as an introduction to the play.