Quest’s brand new series Robson Green’s Australian Adventure airs on Friday 8th April at 9pm. It’s a fascinating adventure through Australia with Robson making his acquaintance with a huge range of those who work with the elements (and insects) to survive in it – from opal mining to cattle rustling to snake catching. 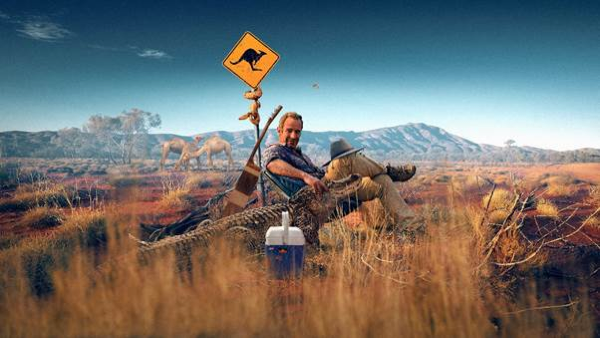 In this brand new, four-part series Robson packs his swag bag and heads to the unexplored, unknown Australia to meet the experts who live in some of the country’s most remote communities. Robson will be getting close to some of Australia’s most fearsome creatures, he’ll be learning how to survive in the outback, how to catch venomous snakes and how to herd wild camels, of which Australia has the world’s largest population! Along the way Robson will be getting up close to some of the stunning beauty that exists in wild places: climbing incredible mountains, swimming in huge sea holes, flying over giddying cliffs and sailing giant waves.

Robson’s colossal journey will run roughly from east to west in a boomerang shape across Australia – a trip of around 5,000 miles. No modern cities, no five star hotels and not many creature comforts! Robson will be travelling light, staying in local villages, using authentic Australian transport to get around – boats, light planes, ‘ute’s’ and of course his own two feet. It’ll be the trip of a lifetime, and we’re about to experience it with him.