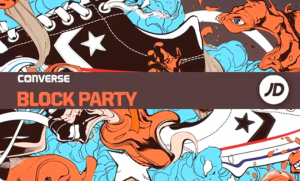 Pay day came and went and it was the same old story; bills and expenses, accounts, budgets and the inevitable austerity forecast is enough to rain on anyone’s parade! Which is why when Converse announced a free, fashionable and funky party in conjunction with JD Sports – with the likes of Wiley, Skepta and P Money featuring to name but a few – it was as if the sun came out and hope was once again restored.

From basketball fields to catwalks, Converse’s legendary style brought them to London’s legendary Old Vic Tunnels to launch their Spring 2012 Star Player footwear range with some of the best acts in UK street culture. Imagine a labyrinth of mystical dark and dingy tunnels lit up with live DJs, MC battles, graffiti demonstrations and skate performances. Well, if that wasn’t enough then add a sea of trendy kids, dashing photographers, cool freebies and mouth watering street food from Jerk Station and Uncle Charlie’s BBQ, “As you like it” – we did!

Converse hadn’t forgotten their younger fans either, and in making the event for over 16s rather than the usual 18 was more inclusive and open minded. Anyone who has ever tried to organise an event to include under 18s will know licensing laws and venue restrictions often don’t make this possible, so it was nice to see they’d gone to the trouble – with the appropriate ID checks and limitations obviously put in place!

After all, Converse states that they’ve been around ‘long enough to learn it’s not about how old you are, but how good you are — and that everyone loves a good story’.

Wrist bands in place then, you were invited into into a warmly lit, antiquely decorated bar, scattered with leather chesterfields to grab an alcoholic refreshment. For their younger supporters soft drinks were also provided behind a quirky piano bar.

“We don’t need these multi-coloured lights in the building yo, this ain’t no R&B party,” one of the acts acclaimed over his mic. It was true, Converse had truly ‘untied their laces’ in making this an unforgettable, underground Sunday story, in every sense of the word.