Martin O’Brien is a British live artist whose work focuses on physical endurance and excess. This is heavily related to him suffering from/having cystic fibrosis. His practice includes a daily regime composed of imposed medical treatments and preparatory exercises for his work, investigating the convergence between the condition of his body and his body-based performance practice.

He is currently artist in residence at ]performance s p a c e [ where he is realising the project ‘Regime of Hardship‘, and he is a contributor (and cover image) of Access All Areas: Art and Disability‘, recently published by the Live Art Development Agency.

I’d like to know more about the relationship between your practice and your illness. How does it define your identity as an artist?

Illness is an important part of my practice. I think, in part, identity is constructed by around the biological conditions of an individual or at least that plays a major part in identity. So the nature of Cystic Fibrosis is part of my identity. My work uses physical endurance which seems to reveal illness, by doing this I think I am able to critique ideologies around the healthy or perfect/athletic body and challenge distinctions between healthy and sick. If, as a supposedly sick person, I am able to go through these regimes of endurance I can deny the victim role and also use endurance as a metaphor for illness.

In the contribution you wrote for the last issue of Contemporary Theatre Review, you define your practice as an attempt to claim ownership over your body that, being out of control, demands the right to perform itself. What is the role of medical treatments in your practice?

In my work I often use medical treatments, I aestheticise these acts to an extent and yes you’re right it becomes a way for me to claim a certain amount of ownership or agency over/within these treatments. They, of course, still have the same physical effects so there is a way in which they are both aesthetic and existential.

Do you consider yourself an advocate for patients with cystic fibrosis? What is your relationship with your audience?

No I don’t. I’m not an advocate, it’s more personal. A subjective experience of illness which is all I can do. I can’t speak for everyone with Cystic Fibrosis although some people may see it as representative of the illness in general. My audience are in the space in order to view me, they see a body with illness going through an ordeal and possibly begin to confront their own fears or experiences of illness and death.

Arlene Croce, in refusing to review Bill T. Jones’ performance Still/Here, said : ‘[…] people who are defined by their body are trapped by them’. Do you think that this risk of entrapment may apply to your work?

I fundamentally disagree with Croce. It is hugely problematic. I see it as a refusal of self-expression to the sick/disabled. So, no, I don’t and I see Croce as echoing a conservative, ethically problematic view. Petra Kuppers, in her book ‘The Scar of Visibility’, makes some useful points in relation to this. 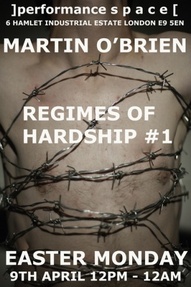 At the moment you are the artist in residence at ]performance s p a c e [ and on Easter Monday you presented ‘Regime of Hardship#1’, the first of three performance installations taking place over the three-month residency as part of your PhD research project. Could you talk a little about it? Maybe because of the period*, seeing ‘Regime of Hardship#1’ with the four stops and the barbed wire, I couldn’t help thinking about Jesus’s Stations of the Cross, am I completely wrong?

Yes you are right. I was thinking around ideas of discipline and self-sacrifice. One popular form of this is lent and Jesus’s fast for 40 days and 40 nights. So I have incorporated religious imagery into the work. Importantly I also made reference to historical views on sickness and the notion of purifying the body through various ordeals or acts of hardship. For instance travelling monks in 16th Century Italy who would self-flagelate in order to ward off the threat of plague. In Regimes of Hardship #1 I used self-flagelation on my chest.

During your residence you also ran a three-day workshop that ended with a 24 -hour performance by your trainees: ‘Altered States’. How would you describe that experience?

Hugely intense! I led participants through two days of exercises designed to push them physically in order to achieve altered states of consciousness for/in performance. It was a difficult time for me to facilitate all of this, I had to be concentrated on them 100% of the time. They were sleep deprived and spent some time fasting. You would need to ask them about their experience to hear what it was like I think as I was experiencing it in a different way.

In May and June you are going to present at ]performance s p a c e [ ‘Regime of Hardship#2’ (10th May) and #3 (7th June). Are you also working on new projects in the coming months?

I may have a few international dates coming up this year in Slovenia and the US but I will show other/older work. At the moment I am focusing on this project as it is quite big. The symposium to end my residency is on 9th June too.

* The interview was conducted in the Easter period.