A handsome Congolese man in a Pepto-Bismol pink suit strides towards the camera, fat cigar clenched casually between his teeth. His red bowler hat sits in stark contrast to the fades beige of the buildings behind him, and the dusty asphalt beneath his feet, yet sits in perfect harmony with his brightly polished red shoes. Elsewhere, two Bolivian women in long flowing skirts of blue and green are caught mid-fight, as one launches a side kick at the other in a makeshift boxing ring in an old, faded courtyard, their long traditional, black braids dishevelled, lace petticoats flying, as crowds cheer them on. 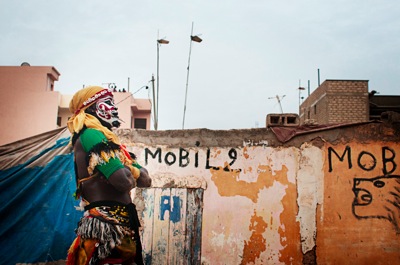 These are just two of a diverse series of works exploring music and fashion and marking a mid-career retrospective of the works of Italian photographer Daniele Tamagni, spanning works from 2007 to date. Running from 24 May–22 June 2013 at ArtEco Gallery, in ‘Global Style Battles’, we enter a colourful and achingly hip world spanning African hell riders and duelling Bolivian women.

How then, does an Italian street photographer end up in locations as exotic as Africa and Cuba? “I am interested in urban style worldwide,” explains Tamagni. “Not just in exotic locales, but also within my own country. However, I try to avoid the label ‘exoticism and ethnographic pictures’.” Enthralled by the light and colours of the South, Tamagni’s projects have taken him to cities such as Brazzaville, Gaborone, Johannesburg, Dakar, Havana and La Paz. “Moreover, I have a lot of African and Caribbean friends,” he explains. “Although I am Italian, I have always been open-minded about learning about and understanding different cultures. The last few years in particular have influenced my style and subject choices, producing portfolios which might generate a critical reflection on the identity of these people who consider elegance their main reason for existence inside a social reality so very different and so distant from that of our own.” Tamagni’s iconic photographs are a mixture of the staged and the in situ, depending on what occurs within a specific moment. The costumes and dress, however, are all real, although Tamagni smiles and says “if they appear to be constructed, then that is good, for I want to leave the viewer questioning what they see.”

With a background in art history, Tamagni is influenced by photographers such as Cartier Bresson and Alex Webb, who “prefer to capture and freeze the instant magic moment in aesthetically beautiful pictures.” In this vein, the Italian photographer seeks to explore the street style of subcultures in contemporary society, presenting them in different contexts, rather akin to Malick Sidibè or James Barnor, who documented street life in African communities in the 1960s and 70s.

While some works feature effortless chic, others (such as a group of young Smaartez from South African wearing pith helmets and short pants) hark to Colonialist images of the continent, steeped in irony and a keen questioning of the stereotypical imagery of culture and locations. “I’ve always been interested in the relationship between Africa, its colonial past, and its relationship to the West,” Tamagni admits. “There are always reminders – these icons are so strong that the urban landscape might even remind one of Berlin, yet is actually Johannesburg.”

Other highlights include ‘Gentlemen of Bacongo’, one of Tamagni’s most iconic and best-known projects. Set in Congo’s Brazzaville, the series explores the social and urban context of ‘Sapeurs’ – which the photographer considers “a revolutionary movement, because dressing up is a way to escape and forget poverty. Sapeurs in most cases are humble people and have come from low classes and have a dream to escape from Africa and have a better life.” These are juxtaposed by the Sapeurs of ‘Afrometal’. In their black leather pants and studded belts, boots and cowboy hats, they could not be further removed from the brightly coloured suits of their counterparts in Brazzaville, yet, for all their heavy metal references, these Botswana meatheads share with other Sapeurs around the country a passion to express themselves. While their clothes may have originated in the West, each iconic style has been re-adapted with African iconography.

There is much to see and explore in the works of Tamagni, and he currently seeks to expand his portfolio to re-explore his roots in Italy as well as return to the Soweto neighbourhood in South Africa’s Johannesburg. “I find that area so inspiring, I need to go back and finish a project,” he says. “Similarly, I would also like to document street life in South Italy, in Naples or Palermo. Coming from Milan, I’ve always had a passion for the former, and the latter has the special Mediterranean light; the people remind also to some extend of those in Havana.” Currently focusing on research and exploring other street-style related issues, Tamagni is also working on a book project; ‘Global Street Battles’ will feature all his works to date in different chapters organised by the specific subcultures related to them.