Restaurants should be an experience. Visiting one should be like going to the theatre in the 1920s. Glamour and opulence should sparkle from the chandeliers – there must be chandeliers. There should be a sense that Scott and Zelda Fitzgerald could appear at any moment, order a dozen oysters and invite you to share a magnum of Champagne. 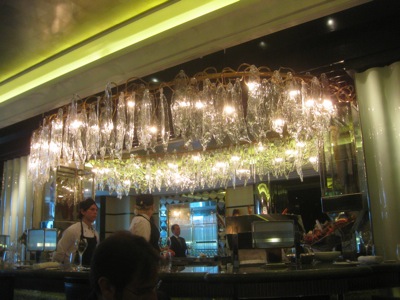 The new chandelier at Kaspar’s, The Savoy

At last there is such a place in London. Robert Angell has designed Kaspar’s at The Savoy in an Art Deco style using modern techniques and technologies that would have been impossible in the 1920s. Combining informality, glamour and the Savoy’s panoramic views along the Thames Kaspar’s is an all-day dining experience with a show-stopping central bar. This is lit by a chandelier inspired by fish hung up to be smoked, which should give a clue that this is a seafood restaurant. 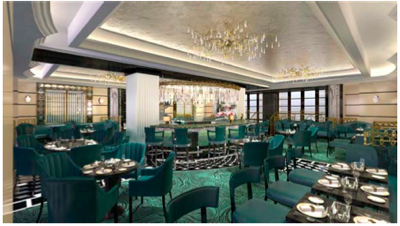 Kaspar’s – the new seafood restaurant at The Savoy

So why is it called Kaspar’s you ask. That’s a bit like asking Dickens Why did you call it Bleak House? – you’ve let yourself in for a bit of a story. Superstition has long decreed that thirteen should never dine together. Agatha Christie even wrote a book called ‘Thirteen at dinner,’ and you can guess how that ended. The Savoy has  been particularly nervous about this since 1898, when a South African businessmen held a dinner for fourteen guests. One guest cancelled, but the dinner continued. A few weeks later – having left the table first that night – the businessman was shot dead in Johannesburg.

A sad occurrence, you might think. Not even a coincidence, you might venture. However the Savoy’s management took this – can we call it supperstition? –  seriously and offered a member of staff to join tables of thirteen thereafter. That wasn’t popular with guests, so in 1927 Basil Ionides crafted a black cat who has made up the numbers ever since. Whenever thirteen people have met to dine at the Savoy, Kaspar is brought out to be the fourteenth guest, complete with napkin around his neck. 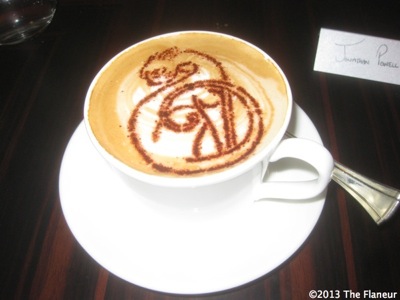 As the Savoy’s newest restaurant is named after Kaspar, the artist Jonty Hurwitz was commissioned to create a contemporary image of this iconic cat. Unveiled only yesterday, Hurwitz has made an anamorphic sculpture which will sit in the bar. Part of his ongoing Generation Pi series of sculptures this is more mathematically complex than Ionides’ original, but the image is nevertheless clearly Kaspar.

This model though will not be moved from table to table with a napkin round his neck. It consists of two precision engineered parts, neither of which separately convey any suggestion of the finished idea. The shiny column looks like, well, a shiny column and the rest looks like an abstract snake curling about it. However when brought together in perfect alignment they bring Kaspar back to life – though he exists only as a reflection in the highly polished column. The distorted proportions of the abstract shape have been calculated so precisely that the curve of the column reflects a perfectly proportionate cat. 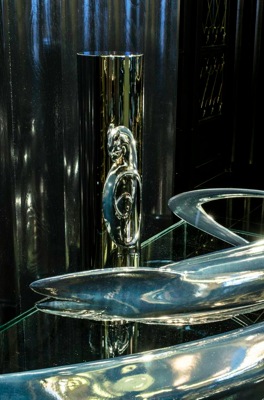 Kaspar by Jonty Horwitz, The Savoy

How does he do it? I don’t think it’s giving away any secrets to say that computers are involved. But anamorphosis has intrigued artists since it was discovered in the Renaissance. Hans Holbein famously painted an anamorphic skull in the foreground of The Ambassadors at the National Gallery. Hurwitz though is using techniques and programs that would not have been possible even five years ago, let alone 500. His work takes an old idea and reinvigorates it for the 21st century. Out of distortion and chaos come forth beauty and order. These pieces make more explicit the reliance on complex calculations that go into any work of art, whether determined by an artist or a computer.

Jonty Hurwitz operates where fine art meets science. He uses algorithms and high-powered computers to produce unique sculptures. You can’t get the ethereal sense of the work from a photograph, so put a trip to Kaspar’s bar on your list of must-dos. The results belie the huge complexity of the mathematics involved. I forgot to ask him to how many decimal places he can recite pi, but you get the sense it might be a lot.

Click the links to find out more about Kaspar’s bar and grill and the art of Jonty Hurwitz.