Last weekend, from Friday until Sunday, I took my bike and I cycled all the way from south London to the Rich Mix and climbed up to the fourth floor. Why? To be part of SHOW TiME, of course.

James Bush, Alex Eisenberg and John Pinder – the artist collective Present Attempt – organised, set up, curated, presented, and performed at a three-day festival of twelve cross-disciplinary performances. Works in progress and completed pieces blended in a series of dynamic afternoons and evenings while we, the audience, were engaged in encounters with UK-based and European practitioners. Moreover, the ‘critical writing on and as contemporary performance’ of Mary Paterson’s and Rachel Lois Clapham’s Open Dialogues responded to each work through an uninterrupted flux of notes, draws, diagrams and words hung all around the foyer. All their material will be collected in a forthcoming publication. 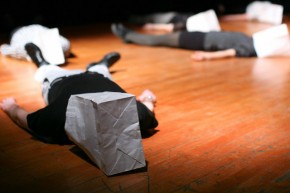 This mixture of works featured different approaches to performance such as dance and choreography with the Bill Aitchison Company’s Club Med–like dances, Seke Chimuntengwende & Friends’s surreal work, and Head of a Woman’s personalities exchanges. SHOW TiME also presented the theatrical performances of Rachel Mars and Rosie Kelly (Spoiling it for everybody else), Haranczak/Navarre Performance’s electricity-focused project Control Signal, and the playful and funny solo performance of Chloé Déchery, A duet without you.

Since theatre is made from the hidden and what can’t be shown, Present Attempt introduced on the stage an unwelcome guest, M.O.U.S.E, and Augusto Corrieri investigated connections between the mechanism of theatre and our place in today’s ‘society of the spectacle’. Furthermore, illustrious guests visited the festival’s stage: Joseph Mercier’s Good boy paid homage to Jean Genet, while a text by Beckett was part of Lisa Jeschke and Lucy Beynon’s He’s dead / He’s dead /I’ve shot him in the head (section I-II-III). And we shouldn’t forget the intense interpretation of the relation between image and narrative, body and voice, object and imagination created by Mischa Twitchin and Penny Francis’s hands. 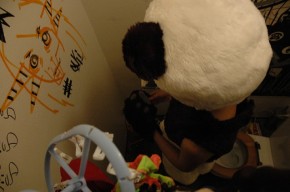 On Saturday and Sunday, in the dark, you might also have been able to spot a panda among the crowd. It was occupying toilets (an occasionally seats) with its suitcases and paraphernalia. This was Yoko Ishiguro‘s Occupied: her way of re-appropriating the public space and time. This performative intervention was presented for the first time during the Opening Ceremony in Beijing 2008.

Screenings (Mixing It Up), performances, installations, dance, theatre. At the end of the three days I had to congratulate Present Attempt for curating such a complex and inspiring event. I am looking forward to the next occasion for them to show us such a great Time. 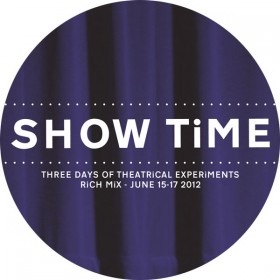