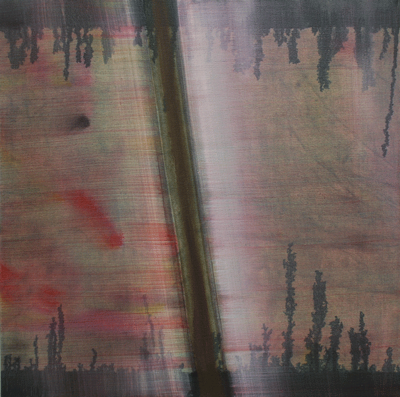 Titles such as ‘Flash-back’ and ‘Mélièse: Kingdom of the Fairies’ offer clues to her source material whilst other paintings such as‘Vignette/Dream Sequence’ are more cryptic but, she says, allude to a bygone age of cinema using photochemical technologies which resulted in a distinctly unique and identifiable colour palette experience. Films such as ‘Oklahoma!’ and ‘South Pacific’ are examples of films produced using Todd-AO technology for example.

These references build on significant research published in her book ‘Shibusa – Extracting Beauty’  co-authored with Professor Monty Adkins through a Leverhulme Trust Award (2011-2012) which explored synergy between music, painting and Japanese aesthetics – the results of which were showcased at her solo exhibition at Daiwa Anglo-Japanese Foundation London last year.  In SCREEN she re-introduces cinematic themes from previous series of works (ie, Film Forensic; Dr Zhivago and Femme Fatale series) which employed the use of colour translucency and cinematic’ ‘letterbox’ formats characteristic of the cinematic experience.

“Both of these references represent highly skilled technologies within their own genre – both, however, are dwindling.  In terms of Japanese kimonos, the market is mired in a slump and  few young artisans can dedicate the time (often 10 years) to apprentice themselves to a master craftsman.  Similarly, the film industry is poised at a threshold of transference from photochemical to digital technology.  A 2011 report on  the Hollywood film industry announced that, by the end of 2013, celluloid film would cease to be used, unless championed by those directors who can afford, and insist upon, using it for its innate qualities.  Whilst new technology offers plenty for us to be happy about, we are standing at a threshold where some highly flexible, inventive skills and technologies could be lost forever.

“These paintings hold a mirror up to these qualities but, also, attempt to highlight the inherent magic and illusioni stic capabilities that reside in painting – an example, itself, of an ancient technology that is still evolving and pushing its own boundaries.”

Senior Exhibition Officer, Jess Morgan said: “We are very excited to be hosting this beautiful series of new works by Pip Dickens.  The pieces contain an inner luminosity that is not easy to judge in a printed or digital reproduction- these are paintings that as a viewer you need to stand in front of and immerse yourself in, just like a visit to the cinema.”

The exhibition of celebration and loss, similarity and  difference, light and shadow, Pip Dickens’ SCREEN runs from 29th June until 31 August 2013.