I met artist Juan Ford during his participation in Hong Kong’s first Art Basel. The Australian artist had a new collection of paintings hosted by the Dianne Tanzer Gallery in Victoria, Australia. I also spoke with Bettina Garnier, curator of same. 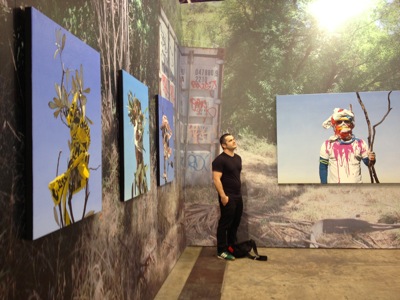 MK: Tell me a little about the composition of these paintings.

BG: They have trees and leaves in them such that compositionally come out as a portrait, the size of the paintings as well.

MK: And are these found or does he construct them?

BG: He constructs them. He finds all the leaves and the materials and then he actually makes objects. They are all native Australian plants that he uses.

JF: This is part of a five year series, I mean. I began with this site once I found out I had been included in the art fair. It is a site between city and country, you know, it’s neither here nor there. That provided the platform on which to build this show. These paintings take the most conservative and most unhip aspects of the Australian art canon, namely botanical illustration, landscape tradition and figuration, and I take those three element and I smash them together and make something new reborn phoenix-like from those ashes. And that’s how these paintings begin. So I create these crude figures that are bound with elements from a hardware store or rubbish or whatever, and you know when you bind nature it will keep growing, the metaphor being that nature will exist with or without us. So it’s an environmental message as well. The figure here is reinserted instead of replaced; he emerges totemically (sic) from this structure. People have asked if it is a self-portrait, and though I used myself in it I don’t think it is.

MK: Right, there is a difference between depiction and reference.

MK: I’m really enjoying the contrast between the dusty green leaves and the bright hardware store orange. How considered were your colour choices?

JF: Well I obsess about colour. So in many ways the colours were determined by how the background was going to go. It is also an instillation as well as a painting show. There’s no need to segregate painting and instillation, art is art. The colours have been determined in an evolutionary fashion.

MK: Tell me a little bit about your set up, it looks like its outdoors.

JF: I spend a lot of a time outdoors, I live in this wooded area in Melbourne and this is five minutes from my house. This derelict site is confronting and scary, and yet it draws you in. I take elements form this landscape, clip ‘em off, create these bizarre and ugly objects, make photos, and from these photos lovingly recreate and edit. Each painting takes about a month at least.

MK: Is the taking and editing of pictures an arduous process?

JF: For every picture there are maybe fifty photos. I work with different exposures. What I’m trying to do is not slavishly recreate a photo, but generate something that we would perceive in life. If this was merely a photo the darks would be darker, the lights would be lighter, the contrast would be greater, but that’s not how we see. The photograph in the end becomes a tool. It’s a crutch that helps me.

MK: Like using yourself when you need a figure?

Exactly, yeah. I edit along the way I change the backgrounds. I do things with colour theory. For example the yellow there and the violet sky are complementary, so it pops. There are lot of little tricky to urge a painting on, to become more real.

MK: Do you find that one of the difficulties of painting from a photograph is that the object has already been interpreted into two dimensions?

JF: I’ll take multiple angles. I work from several source images to try and bring it together into one experience. 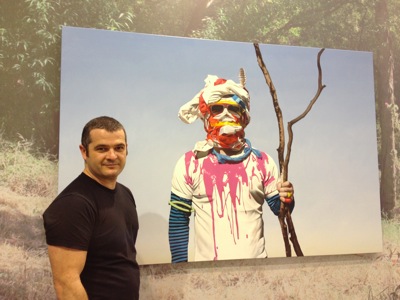 Juan Ford with one of his works at HK’s Art Basel. Photo: Morgan Kwok

MK: Where did you go to school and what did you study?

JF: I actually studied engineering at first, and I was good maths and science so it seemed natural to do. But I could always draw well, and I ended up filling my notes from lectures with drawings. I started hanging out with the fine art student because they were more fun, had better parties, and had girls in the courses. I ended up putting together a portfolio and going to art school. Consequently I emerged some years later with a research Master’s degree. At that point I had been exhibiting. I had enough of a body of work that as soon as a gallery took me on I was able to quit my job, and I’ve been full time ever since.

MK: Studying science and engineering requires such meticulousness; do you find any harmony between that and the way you paint?

JF: Oh certainly. It helps me think through problems and work things out. Every painting is a problem in its own way. Every leaf presents a challenge. It helps me resolve things. Also one thing that people don’t often think about is that they worked us very hard in engineering, very hard, and I went after the Fine Art degree with tremendous work ethic. That was a great help.

MK: Does the study of processes in Engineering lend itself well to your methods? Do you know the process you’re going to go through before a piece, or do you make it up as you go along?

JF: Each painting is a challenge in a different way. I still give myself a headache trying to work out how I’m going to do certain things. Certainly combining the paintings with this wall paper presented all kinds of trouble.

MK: Did you take this picture? (gesturing to the wall papered image)

JF: Oh yes, that’s another thing. I stitched these photos together, and had to find a sufficient resolution. There was working out how to do that. All that requires being able to figure out how things work, and I think that background really helped there.