The end of the world is nigh. Possibly.

December 31st 1999. I was standing on Westminster Bridge in London waiting for Big Ben to chime in the new century. I turned to a friend and said ‘Some people think the world will end in 20 seconds!’

That rather took the shine off the next few moments. Rather than join in the crowd’s shouted countdown we argued the likelihood of soon being dead, which is not a good way to spend the vital moments of a party. Luckily the world carried on rotating and we joined in the celebrations with added vibrancy, powered by the extra relief that the apocalypse had held off.

But when had it held off until?

This year an exhibition at Penn Museum, Philadelphia looks at the latest doom-mongering and asks, among other things – Will we all be dead in six months?

Curated by Loa Traxler and Simon Martin, this show hangs on the latest potential prophets of doom to come to attention – the Maya, an ancient civilisation that flourished in Southern Mexico and parts of Central America. Traxler is the Mellon Associate Deputy Director of the Penn Museum whilst Martin is Associate Curator of the Museum’s American section and an expert on Maya hieroglyphics. Penn Museum is an ideal place to examine this subject as for over 30 years it has hosted an annual Maya Weekend when experts have met for a series of events centering on the Maya World.

The exhibition has over 100 objects on display which lead through the Maya’s world, explaining the complex time-ordered universe in which they lived. Items include pieces from the 1990s excavations of Copan, the capital of the Classic Maya kingdom in western Honduras. Copan was prosperous between 250-900 BCE and the excavations have provided in depth information about its sociopolitical organisation. Pieces too heavy to be brought from Honduras have been recreated to give a sense of the scale and grandeur of the carvings the Maya achieved.
Many people have caught onto the claims that the Maya predicted an end of time moment that is – for those of us planning to still be around in December – a little to close for comfort.
!!!
Spoiler alert!
Read no more if you want it to be a surprise when the world ends…
!!!
The Maya believed their Kings were embodiments of time, which gives you an inkling of the complexity of the system they built up around this central thesis. It appears that the Maya used several interconnected calendar systems of which the most elaborate, the Long Count encompassed trillions of years. Linking their calendar to ours is a tricky business, but it is one of the cycles of this Long Count calendar that comes to an end on December 23rd, 2012. Or possibly December 21st, depending on which scholar you read. But there’s no need to argue over a couple of days when we’re discussing the end of the world.

The exhibition is interactive, kid-friendly and includes several opportunities to examine the meanings of Maya glyph writing and print out your own Mayan name. These are modelled on the names of rulers that have been found on ancient Mayan monuments. Mine is First Crocodile which I like to think conveys all the important qualities I embody. Not that, to be honest, people often meet me and say, ‘Oh my, you’re so crocodilish.’

Unlike our 10 numbers the Maya used just three symbols that could be written in different places and formed a Base 20 system –  we make do with Base 10. So a date looks unusual to Western eyes. 13.0.0.0.0 is the important date at the moment, 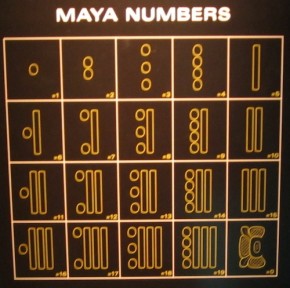 which corresponds to the December 2012 dates mentioned above. If this date is of cosmic significance then a new age may be ushered in – or – more worryingly –  an old age ushered out, with big bangs and fires and general Book of Revelationsesque panic.

However, the language the museum uses suggests it takes a sceptical view of the idea of an End Time being just around the corner. After all, the Maya made no prediction of what would happen at the end of the cycle and the date of 13.0.0.0.0 is only mentioned once. More importantly still, there is evidence that the current cycle lasts longer than the previous one. ie- 13.0.0.0.0 may be followed by 14.0.0.0.0 . So if your birthday is after 22 December you may still get a chance to celebrate.

The show also casts light on the disappearance of the Maya from the historical record. This is known as the Maya Collapse, when many Maya cities were abandoned in 9 BCE onwards. They did not however disappear overnight and the show explains the factors involved from over-population to warfare that saw the Maya’s influence quickly decrease.  The Maya did not completely disappear. There are more than seven million Maya people living in Central America and the exhibition ends with a glimpse into the current lives of these once powerful people.

So what has the museum concluded? Should we be canceling the life assurance and partying like it’s 1999? There’s a clue in the exhibitions dates. The show runs until January 13th 2012.