The original Mille Miglia car race ran from 1927 to 1957. The cars that took part in these races are celebrated in the Mille Miglia museum in Brescia, along with Italian culture and costume from the period. A ticket will set you back €7 and gives you access to a well laid out display that snakes through the old monastery of Sant’Eufemia della Fonte. That’s right, the museum is housed in a restored monastic complex, the oldest parts of which were built in 1008.

Although the Mille Miglia is one of the oldest car races in the world, the museum has only existed since 2004. It aims to not only show the history of the race but to convey something of the changes in Italian culture and customs over the years. 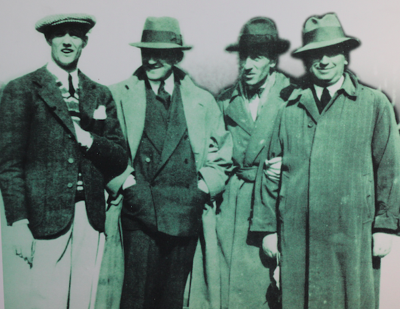 The museum starts by introducing the four men who first had the idea of ‘creating something sensational which will wake the automobile world from its slumbers.’ They were Giovanni Canestrini, Franco Mazzotti, Aymo Maggi and Renzo Castegneto. They were quick workers – they first discussed the idea in December 1926 and on 27th March 1927 the first Coppa della Mille Miglia got underway! 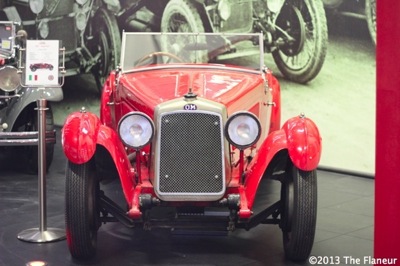 Cars from local Brescian manufacturers Officine Mecchaniche (OM) came first, second and third in the first race. Ferdinando Minoia and Giuseppe Morandi won in their OM 665 Superba, averaging 48 mph for over 21 hours and finishing 15 minutes ahead of their nearest rivals. The greatest problems were not mechanical, but – like modern F1 – tyre degradation. The museum has examples of the tyres and of the quality of the roads in each decade of the race – perfect asphalt they were not. 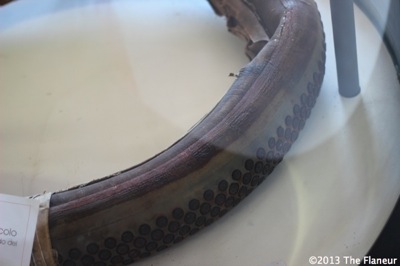 The first race followed a figure of eight route that circled northern Italy, crossing in Bologna. There were 18 controls in different towns along the way where teams had to get a stamp to prove they had not cut any of the course. Of the 77 starters, a remarkable 70% finished the race. The original plan had not been for the race to be repeated every year. But Mussolini is reported to have heard about the Mille Miglia and said, ‘It is to be repeated.’ So it was. 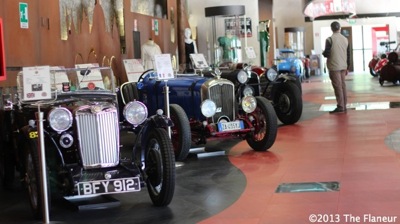 The pathway through the museum follows the history of the race chronologically. Cars that took part in each edition of the Mille Miglia are displayed on either side of the long wings of the Monastery of Saint Eufemia. Large windows allow the cars to sparkle in the sunlight. As you progress through the museum the cars get more modern, and displays show artefacts from the period, including dresses, petrol pumps and motorbikes. There is also a section showing clips from Amacord, the Fellini film that includes shots of the Mille Milgia. 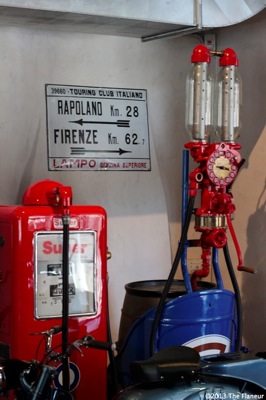 There are stunning cars everywhere you look, and many of them sport modern Mille Milgia stickers, showing that they have been raced in recent years. The display does change as the cars are not just museum pieces. All are restored to great condition and many are used in classic car events such as the Mille Miglia. 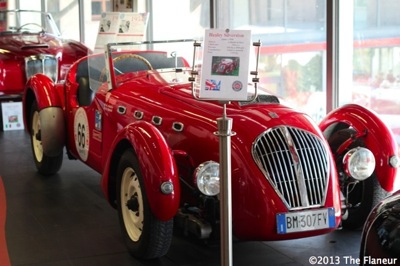 When I visited the museum it also had a Formula One simulator and a well-stocked book shop. I bought a DVD and the girl behind the till handed me my receipt with a breezy Grazie Mille. With all the Mille Miglia signs around I half expected her to say Grazie Mille Miglia, but she restrained herself. Outside I saw this sign and thought hang on, I don’t remember seeing that. 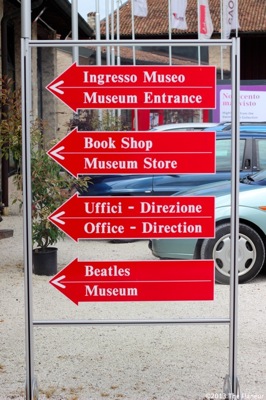 Museum, yes. Book shop, yes. Office, yes. Beatles Museum? That was unexpected, like going to St Paul’s Cathedral and seeing a sign for the swimming pool. I went back in to investigate.

I shook my head. I would have remembered a Beatles museum.

I don’t know whether it’s shut for good or if it was just shut that day. If anyone has seen the Mille Miglia Beatles Museum can you tell me what it is like? As for the main Mille Miglia museum, if you’re in Brescia and can see the beauty in vintage cars, get down to Viale della Bornata, 123 – S Eufemia. You won’t be disappointed.