How the fashions change. Only a few centuries ago a gentleman would never leave home without a codpiece, yet today the number of codpieces worn on Oxford Street is nearer to none than any other number. ‘Tis the same with ingredients. Last year everyone used acia berries in everything, today I haven’t eaten one. Until last week I thought garlic was a simple onion-related vegetable, no more complicated than a hair-brush. 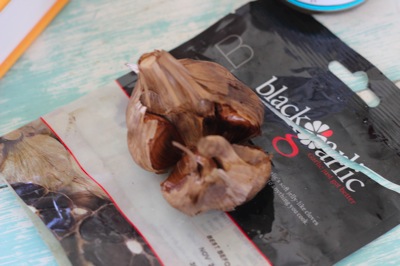 How wrong I was. As well as the standard Allium Sativum that has been flavouring dishes for 7000 years it turns out there is also something known as black garlic. Maybe you cook with it everyday already, but for me it was a new ingredient. It is well-named – if you didn’t know what to expect you would throw it away, muttering ‘I only bought that yesterday and it has already gone off.’ The packaging was unclear about exactly how it went from white to black. Ageing was mentioned, but I’ve often found ageing vegetables at the bottom of my vegetable drawer and they have never turned sweet and delicious. The cloves of black garlic have become soft and jet black and it seems that fermenting is part of the process. Black garlic was developed in Korea and became popular by 2009, so my discovery is only half-a-decade behind the times.

This garlic has become mellow. Just how mellow is obvious when you read that the packet suggests that you can snack on it. Raw. Tried like that it has a balsamic vinegar taste, with a hint of molasses. Like its appearance its taste has changed completely. 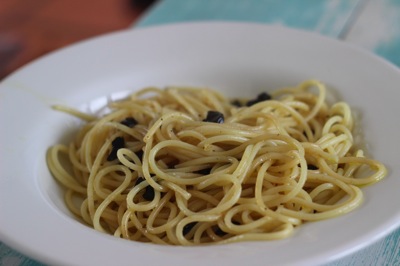 In an aglio (nero) e olio with al dente spaghetti it gave a sweet taste with a chewy texture. Baked in bread rolls it infused the dough with a balsamic lightness and attractive dark swirls. You get a sense of how delicious the Black Garlic rolls were by the fact that before I remembered to take a photograph they had all been eaten.