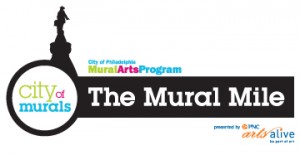 Many towns frown on street art. Not so Philadelphia which has had an active Mural Arts program since 1984 – the oldest street art program in the world. Since then the city has created over 3000 murals and works of public art, using the program to bring communities together and transform neighbourhoods. Local people decide on the content of their murals and combine together to create the work. Applications for murals are simple and inclusive – anyone who wants to see a mural in their neighbourhood just has to fill in the electronic form here and hope their suggestion is one of the 100 murals created every year.

With 3000 murals to see it would be difficult to fit them all into even the briskest of walks around the city. However the Mural Arts program has produced a map that guides visitors around several of the murals in the Center City, demonstrating the diversity of styles and subjects that can be seen in this outdoor gallery of art.

The Mural Mile walking tour starts with mural Tree of Knowledge at 13th and Market Street. However if your legs can manage 2.5 miles then you can start at mural Legacy at 707 Chestnut. Either way the map clearly indicates the way to go – and if you get lost someone will be sure to point you in the right direction. Whilst walking the route I was asked three times if I needed directions. One man even stopped his car to proffer advice when he saw me consulting my map. You can download audio descriptions of the murals on the tour before you go from the link below, or you can use your cell phone to call (215)525-1577 followed by the number of the mural whose story you wish to listen to.

The murals in Philadelphia vary in size, from the merely big to the utterly enormous. Most are three-storeys high, but they reach up to a massive eight-storeys high. The largest – How Philly Moves – is almost 85000 square feet! This monster mural cost $470,000 although the average cost is nearer $25-30,000. Subjects include community heroes, complex allegories and scenes of local life along with a few abstractions and the odd famous portrait.

The mural program grew out of the Philadelphia anti-graffiti network. Artist Jane Golden befriended graffiti writers, recognised their talents and brought them onboard the mural program to direct their energies in a positive direction. From the start the mural program has been a manifestation of the simple statement Art saves lives. The Philadelphia Inquirer recently described the Mural Arts Program as, “by far, the most important, prolific and successful public art project in the nation. And that is because of Jane Golden. The artist, a woman of remarkable intensity, drive and heart, took what might have remained a minor city program aimed at eradicating graffiti and turned it into a force for beauty, redemption and hope. Golden is a singular force who helps make Philadelphia distinctive.” Thanks to the success of the mural program Philadelphia now trains painters from around the world who want to become muralists, as well as sending out artists to other cities and countries that need leaders for their own mural projects.

You might not be able to see all 3000 murals in one trip, unless you’re a very good map reader with a unusual turn of speed, but the Mural mile compresses several murals into a small area and makes a great way to see a few highlights of the Mural program. And keep your eyes peeled – even the bins host murals in Philadelphia!