Santa Giulia museum in Brescia was a great discovery. When I visited there were two temporary art exhibitions, the permanent collection and some highlights from the Tosio Martinengo gallery which was being restored. I was supposed to leave at 4.00pm to visit the Capitolium, but there was too much to see in the museum and the ruins had to wait. Anyway, Santa Giulia museum is itself built on top of some Roman remains, one of the few cases of bringing the museum to the ruins rather than the ruins to the museum.

In the atrium was what appeared to be a gull-wing sports car prototype, all rivets and unprimed metal. In fact it was a sculpture by Michael Sailstorfer, who had painstakingly transformed a Mercedes 190 into a C11. There is beauty hidden within the mundane, but it takes a lot of work to find it. When you do it’s impotent, not even as useful as the original. Maybe beauty is not as important as we tend to think. 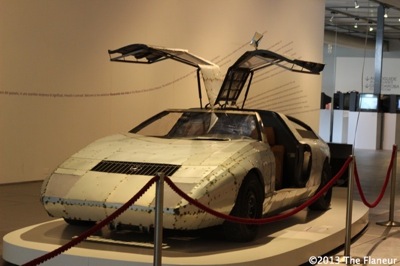 ‘Sir is this yours?’

I’d just bought a ticket and was walking towards the start of the museum’s displays. I turned round to see the girl from the ticket office running after me. She was holding a well-used notebook. One that I recognised.

I thanked her and wondered if it was time to start chaining it to me. I like to think I’m too young to be going senile, but that was the second time I had left my notebook behind. In two days. It’s OK when there’s nothing in it but my name and address, but as it starts to fill up with illegible notes it becomes something I don’t want to lose.

The Santa Guilia museum spans over 3000 years of history – not including the art galleries on the upper floors. Immediately on reaching the start of the museum proper you are faced with a left/right choice. I peered at the map I had been handed with my ticket. A nearby attendant asked me what I wanted to see. I said everything. She looked at her watch and said they closed in two hours.

The implication was that I would not have time to see 3000 years of history in two hours. She had a point and I asked for directions to the art galleries. After having visited them (See other reports on The Flaneur) I returned to the ground floor.

‘Santa Maria in Solario is beautiful,’ the attendant suggested. I followed her directions, past another car sculpture parked in a courtyard. 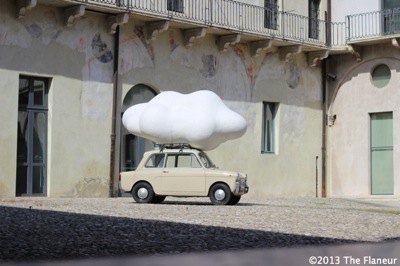 This seemed to be saying Everywhere we go we always take the weather with us – or our moods at least, but in fact the local artist Gabriele Picco is quoting from an Italian film series. The car is a Bianchina which has social connotations – you have to be well-versed in Italian popular culture to understand it, and unfortunately I’m not.

I entered Santa Maria in Solario and disturbed a gallery attendant who was happily reading a novel in the half light of the old monastery. She directed me upstairs up a narrow staircase and followed me up incase I had nefarious aims. I didn’t, but I suppose she wasn’t to know that.

The Oratory of Santa Maria in Solario is a well preserved Romanesque room built on a square plan, dating from the 12th century. Yellow painted stars twinkle in a rich blue ceiling, whilst the walls are covered with frescoes of scenes from the life of Jesus. 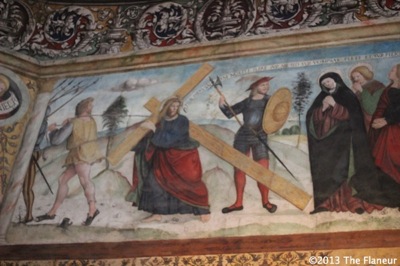 I realised I didn’t have time to make an in depth study of the room, complete with sketches of all the frescoes and plaster casts of notable columns for the V&A. Instead I went outside and tried to visit the church of San Salvatore which was right next door. The whole museum is a complex of churches and cloisters. However, though San Salvatore was only a few metres away the only way to get to it – apart from pushing past a flimsy barrier – was to go through the museum. I was given complicated instructions which I would have struggled to remember had they been in English. As they were in Italian I was lost after the second or third sinistra and headed in the general direction trusting to instinct. 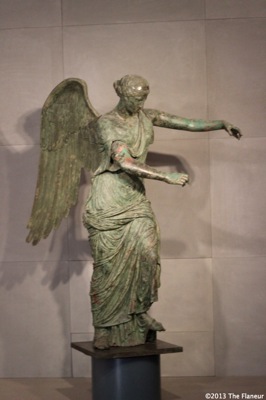 The Winged Victory is one of the prized possessions of the museum. Though the world is overrun by ‘Roman copy of Greek original’ marble sculptures, it is rare for ancient bronze statues to have survived. It was probably a votive offering, cast using the lost-wax method around 2AD. Details have been carefully etched into the bronze and the raised left foot would originally have stood on the helmet of Mars, god of war.

En route to San Salvatore I came across the Monastery Garden Domus. I didn’t have bags of time, but Roman ruins are Roman ruins – I’m only human and couldn’t walk past. The museum has actually been built over the remains of two ancient town houses – the domus of Dionysus and the domus of the fountains. Before you get your hopes up, they are no Pompeii, but they are all inside the museum with walkways over them allowing you to get close to the ancient walls and mosaics. 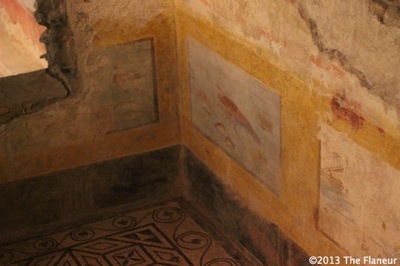 Along with the in situ remains of the houses, there are several displays of objects found in the area. Given the chance big museums like to wow visitors with the sheer number of old pots they own. I have been to museums with display after display of pots. Big pots, small pots, broken pots and mended pots. They even included bits of pots, incase your appetite for pots wasn’t sated.  (Are you listening Agrigento?) Here though the pots are kept to a minimum and the displays include more unusual items such as piles of small tesserae used for making mosaics. 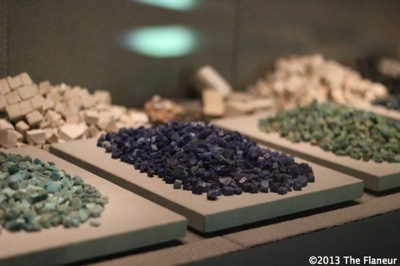 Time now was running out. Not in an existential sense, just until kicking out time at the museum.  I headed through a corridor with large mosaics on the walls, rescued from Roman villas. Abstract forms were a typical decoration around Anno Domini, although swastikas seem to have been a more popular choice than they are today. 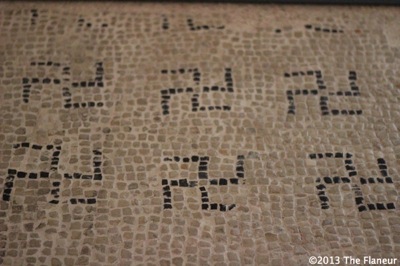 There didn’t seem to be any way to get to San Salvatore. When I had entered the museum I had had no great urge to visit it, but now that I couldn’t find it it had become the only thing I really wanted to see. Eventually after walking backwards and forwards I found an attendant. I was about to launch into a request for directions when I noticed a sign behind her. San Salvatore. I had found the elusive church. 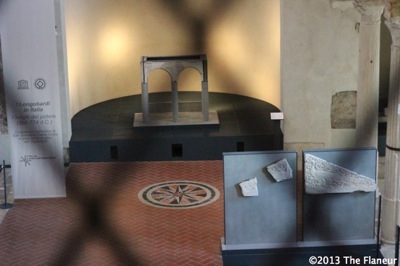 That’s the view of it that the nuns had from their choir. They could only participate in the services through an aperture in the east wall. But their choir above the church was more impressive than the church itself, frescoed by Floriano Ferramola in the 1420s and richly decorated on all walls and ceiling.

Santa Giulia is a large museum, so if you visit  give yourself more than two hours to do it justice. My ticket included entry to a guided tour of the Capitolium as well, but I missed the appointment. (Un)luckily it was valid for the next day as well…