‘It’s a completely valid thing to do, to risk your life for journalism‘ Vaughan Smith.

That war reporting is dangerous has never been in doubt. The situation in Syria is however much more dangerous than before. Olly Lambert has been reporting from war zones for a decade and said at Sheffield Doc/Fest that in Syria ‘everything is at a higher pitch.’ It  is by far the riskiest place he has experienced. Primary-school teacher turned filmmaker Mani has visited Syria many times and has noticed the danger ratcheting up. At first it was ‘just a danger of being arrested or shot by a sniper’, he said matter-of-factly. I would have thought that was danger enough, but now journalists also face the dangers of kidnapping, thieves and deliberate targeting. 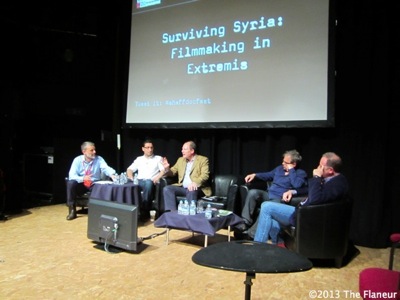 The panel was composed of filmmakers Mani and Lambert, as well as Vaughan Smith of the Frontline Club and Simon Marr who runs the BBC’s high risk department. Chairman was Wotienke Vermeer who got things started with a clip of Lambert’s award-winning documentary from Syria.

‘Syria is not for novices,’ Simon Marr said. Many news organisations have decided it is not for anyone, not wishing to accept pitchers bathed in blood, as Smith poetically put it. But should Syria become a story that we don’t cover because we find it too risky? Smith said that freelancers were still travelling to Syria, and if their work wasn’t being seen then it was a decision by the media not to buy the images.

Clips from films by Mani and Lambert showed the remarkable footage they had returned with. Lambert had been in a village when it was attacked and had left the (very relative) safety of his fixer to film at the main point of destruction. Mani had filmed a man showing off his DIY bombs and a home-made suicide belt – although I suppose all suicide belts are home-made. He put the belt on and talked Mani through his lines of defence – first a grenade, then a pistol, then, if they both failed, pressing the trigger on the belt. ‘Those will be the last moments of your life,’ the fighter explained unnecessarily.

Vaughan Smith made the point that many journalists see the profession as an intellectual challenge and aren’t so good at or interested in issues such as safety. He is not against people being able to seek out information as freelancers, but he feels they should have a minimum level of safety training. A first aid course at least, so that you can keep other people alive. He believed in the right of journalists to be in war zones trying to tell the stories, saying, ‘It’s a completely valid thing to do, to risk your life for journalism.’ .

The BBC believes it has a duty of care towards any people it sends into danger. The cost of training journalists for the experiences they will or might have have to be factored into the cost of programmes. But freelancers do not have that back up or investment. As a way to help protect freelancers the Frontline  Club has recently set up the Frontline Freelance Register. This is a register of journalists that allows each member to display their experience and the safety courses that they have undertaken. Smith hopes that this will change the relationship between freelancers and media organisations.

There is a paradox that although media outlets don’t want to be seen to be encouraging freelancers to take risks, they are happy to utilise UGC (user generated content) filmed by ordinary people on the scene. In a strange way it is harder for a freelancer to get war zone work published than a citizen journalist.

The panel looked at the dangers involved in travelling to Syria for freelances and those backed by big media organisations. The dangers for both are large, but when something goes wrong freelancers are often seen as foolhardy whereas employed journalists are held up as unlucky heroes.  If the stories of Syria and other war zones are to be told properly then the work of freelancers must be shown to the world. The Frontline Freelance Register has only existed for a week, but it already has over 200 members. It may be the means by which the safety of freelancers is taken more seriously in the future.