Surreal, sinister and erotically charged compositions amongst a hoard of Dali works worth close to £1million

In the ‘FruitDali’ series the artist appropriates very traditional nineteenth century botanical lithographs, designed as scientific illustrations, and paints over them with his characteristically fantastic embellishments. Commissioned in 1969, the paintings have been in private hands since their creation. Each painting is valued at £40,000 – £70,000 and the series is expected to make close to £1million. 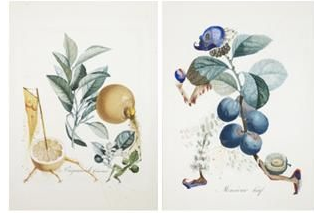 This series of fourteen paintings show Dali’s desire to take the ordinary and subvert it. Dali’s obsession with a warped, sinister version of life is perhaps rooted in his own history. He is quoted, “I myself am surrealism”.

Dali was surrealism’s most exotic and relentlessly popular figure. His eccentric, attention grabbing behaviour was arguably the product of an abnormal childhood. The artist had an older brother, also named Salvador, who had died almost exactly 9 months before Dali’s birth. Aged five, he was taken to the grave and told that he was a reincarnation. “We resembled each other like two drops of water, but we had different reflections.” Dali said of his deceased brother. “He was probably a first version of myself but conceived too much in the absolute”. In his own eyes, Dali was a distorted version of his elder sibling.

Dali declared, “I see the human form in trees, animals: the animal and vegetable in the human. My art shows the metamorphosis that takes place.”

These fourteen original Salvador Dali watercolour fruit studies, unseen until now, will be sold at Bonhams’ Impressionist and Modern Art sale in London on 18th June.