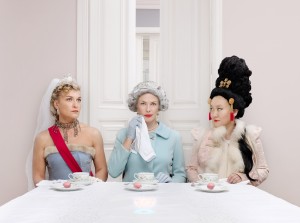 Thursday saw the opening of The Crown at Erarta Galleries a contemporary Russian exhibition of Russian art collective The Fourth Height and Swiss photographer Urs Bigler, curated by Xanthi Skoulariki and Diego Giolitti.

The exhibition deals with issues of post-Soviet Russian identity and explores “Russianess” in relation to old Russia, Europe, and Asia. The approach is playful and even kitch to some extent but the underlying meaning is poignant. As Xanthi Skoulariki comments “This exhibition is a gentle one but it has a hidden force; it doesn’t intimidate you but includes the viewer in a discussion over Russian identity and tradition.” The artists are not looking to make a grand statement about what is Russian, or criticize people’s view on Russia, but rather explore the shaken and multidimensional cultural identity of Russians.

The artists have created a series of highly stylized pictures with photoshoped backgrounds, where each one of the members of the Fourth Height has taken on the role of representing one of the identities they are examining. In Dragon, Europe and Old Russia are looking sternly ahead confident in their history and also close-minded to the continuing growth of the Asian aspect of Russia. Asia is starring at Europe and Old Russia looking towards its continuing expansion. The photograph manages to highlight the inner dynamic of a present and future Russian identity. Diego Giolitti with reference to this photograph supports that the artists have been “Very honest in terms of the geopolitical and cultural struggles in Russia”. 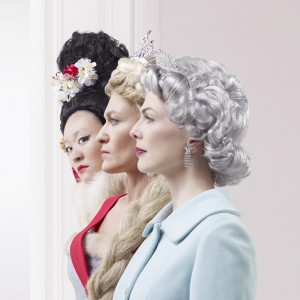 Despite the solid Russian theme to the exhibition it is open and hopes to include people from many different cultural backgrounds. The themes and the visuals of the works are developed in an easy and direct manner making them not only relevant to Russia but placing them to a general diversity and globalized context, which can be approached by all (the artists themselves come from different parts of Russia, the photographer is Swiss, one curator is Greek but identifies with Britain and Russia, and the other curator is Italian but is the director of the Russian gallery!). The exhibition is very current as it also relates to themes of sporting and the Jubilee. In Warming Up, Europe is represented by Her Majesty Queen Elizabeth II and set in a stance of a gymnast waving towards the viewer to challenge her into a fight; which she clearly seems confident she will win. The intense blue and pink colours of the photograph do manage to bring down the intensity of the Queen’s pose and allow for the viewer to blissfully examine it. 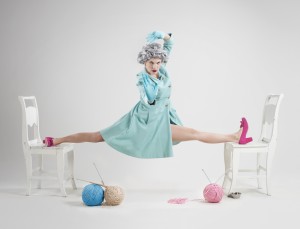 The exhibition will continue on until the end of August so don’t forget to pass by Erarta Galleries; you can not miss the long window on Berkeley Street which is more than enticing!

The Crown, The Fourth Height + Urs Bigler, Erarta Galleries, until 31st of August