Until last night I believed that plays belonged indoors. After a series of summery Shakespearean soakings I had decided the urge to stage plays en plein air was a British foible that should be overcome – like driving on the left and using French to sound more intelligent.  When you live in a country where even the sunniest day can end in snowdrifts why take the risk? One year I visited the Ludlow festival and watched Shakespeare in the ruined castle. I don’t remember which play I saw, but I do remember the weather. It rained so hard that someone who had arrived unprepared quite literally put on a bin bag.

Luckily there are still theatre companies that are taking the risk, one of which is London’s Freeopenairtheatre.org. They are performing two of Sophocles’ great plays in The Scoop, near Tower Bridge and City Hall. As this is the nearest London gets to a Greek amphitheatre it is the perfect place to watch Oedipus and Antigone, especially when, as when I pitched up, it is a balmy evening with a large crowd. 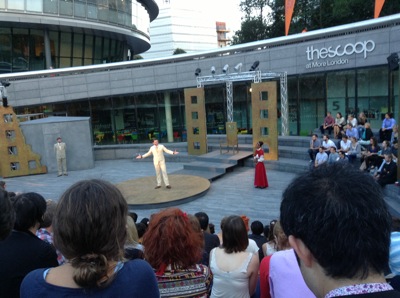 I arrived in what is known colloquially as the nick of time. As I walked round the sunken amphitheatre towards the entrance the theatre appeared to be full. This was a bit of a downer, as I’d legged it to London Bridge as soon as I discovered the play was on. I’d taken the gamble that Greek Tragedy was not a crowd-pleaser, but that was a definite mistake.

‘Are there any tickets left?’ I asked a T shirted security guard blocking the entrance.

He smiled as though I was a simpleton.

‘It’s free!’ he said, and pulled my left hand towards him. On my wrist he stamped the date in black ink.

The first play of the pair started almost immediately rather as though they had been waiting for me to arrive, although I doubt that was the case.

Oedipus and Antigone are both new interpretations by the pseudonymous Lisa Kuma, who is actually a well-known playwright. I hope she’s really Shakespeare, although given recent revelations she’s probably JK Rowling. Oedipus, king of Thebes is played by Philip Scott-Wallace in a booming, enthusiastic style that involves the audience in his journey from newly-crowned king and riddle-solver to… well, can you have spoilers for a play that was written c429 BC? The programme hints that Oedipus discovers ‘some dark secrets about his own past’, which is putting it mildly. OK, in case you haven’t been concentrating the last two and half thousand years we’ll try and stay spoiler-free.

Suffice to say there’s a lot of plot crammed into one hour.  The way the chorus is embedded in the audience works well, involving the viewers in the play and making us feel like honorary Thebans for the evenings. The big theme of fate is debated and Samantha Lawson’s Jocasta is thrilling, the proximity of the actors to the audience allowing an interaction that doesn’t exist in theatres where the audience are sitting in darkness.

The family next to me left about a minute before the end.  I can understand doing that a Wembley, if you want to get a march on the other 79000 spectators. But at the Scoop it seemed bit unnecessary. Maybe they didn’t know there was another play to come. Antigone was performed after a short interval, during which children ran onstage, my neighbours discussed their cushions and I thought, cushions, that’s a good idea.

More people arrived to watch Antigone. ‘You missed a guy stabbing his eyes out’, said one man to a new-comer. Whoops, I guess that’s a spoiler. Antigone does not have the dramatic tension of Oedipus, but being set after the action in Oedipus it has to be performed second. Lucy Cudden gave a believable performance as a woman forced to make a hard decision, but the play lacks the strong plot of Oedipus. Lisa Kuma’s new interpretation and Anthony Topham’s performance do bring out more humour, with a shepherd saying lines like If I leave now I should get back to Cithaeron in time for lambing.

The experience of watching Greek dramas in an open-air amphitheatre is so 500BC that you might wish you had dressed up in a toga to attend. I’m actually in the Athenian theatre of Dionysius, you may believe, until you look up and see the well-lit office blocks, which do take away some of the effect. Why do the lights at City Hall flicker on and off so much?

‘I love Greek Tragedy. Live for it,’ said a man on the row in front of me when the play ended. I wouldn’t go that far, but this is definitely one of London’s summer treats that should be even better known.

Every Wednesday to Sunday until 1st September