A playground for arts, technology & entrepreneurship

Until 31st August the large foyer spaces at the Barbican have been taken over by Hack the Barbican, a free arts project without central curation that takes its inspiration from hacker culture. The performances and work on show changes over the month and you can see the full schedule here. Interactivity is a big component, with viewers not just looking but also participating in many of the works. 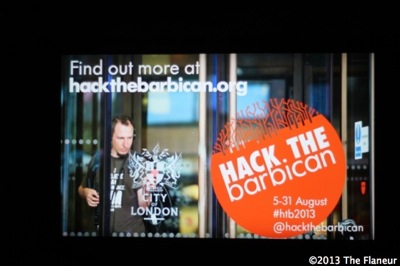 I was met with a graffiti wall when I visited during week 2. This was scrawled with messages, getting more and more illegible as the layers of writing built up. Inside the foyer was Shelfstory, a circular set of shelves displaying objects which featured in a short story sitting on one of the shelves. The public is invited to hack into the story by tweeting images of objects. These will then be incorporated into the ongoing story. Control of the future direction of the piece is being shared with the reader.

Across the foyer artist Sylvia Morgado was involving visitors in a series of works involving words, typewriters, mirrors and more. Morgado is a cross-media artist from Brazil whose work at the Barbican can be seen as a collaborative residency. Visitors are asked to participate, for example – writing regrets that they wish to forget, to reflect on what they see in the mirror, typing memories they want to fade. Morgado herself spends a lot of time reflecting and wants other people to experience the benefits. Her work is very personal, not just to her, but to the viewers who get involved. She will be around until Sunday 18th and is up for a Brazilian Press Award – if you like her work vote here. 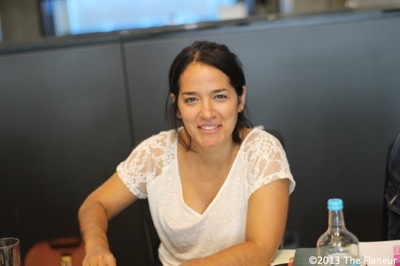 In the Fountain room was a soundscape by Kacper Ziemianin that imagined that the Barbican could hear. For the first days of the project microphones were placed around the buildings and spaces of the Barbican centre. The sounds they recorded have been edited together into a sea of sound, waves of ambient noise rolling across the room. Visitors have been able to participate in the final piece by altering the sounds recorded by the microphones they have spotted. 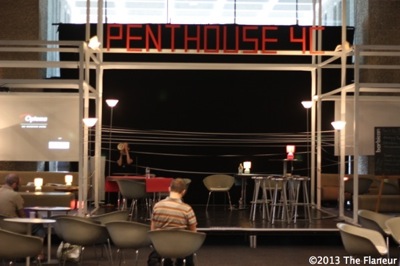 Penthouse 4C by Lawrence Lek is a half-size replica of the most exclusive apartment in Barbican Towers. Used as a stage for performances, it was the scene for a spoken word piece by Matthew Lee Knowles. In Black Holes of the Mind by Laonikos Psimikakis-Chalkokondylis, Knowles  had wound narrow paper scripts around the stage and was then reading the thought provoking messages through a microphone. Is life a preparation? Or the thing itself?

The large foyer spaces at the Barbican are an ideal space for this sort of group-curated intervention. There is a sense of energy and invention. With Hack the Garden working with technology to help keep plants alive and many more works on show over the rest of the month hack these is a free show in which you should find something of interest.