Dusk on the Mall. A large pop-up cinema on the Duke of York Steps to the west of the ICA. A perfect, natural cinema location. Although by natural I mean man-made of course. I arrived and handed over my ticket. 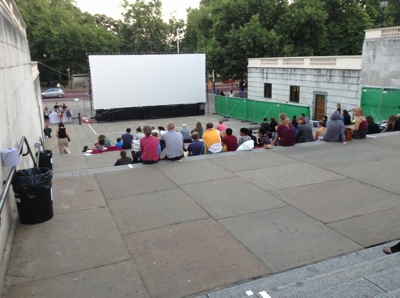 ‘Do you have any glass bottles in your bag?’ the ticket collector asked.
‘No.’
She looked at me suspiciously.
‘Because if you do you can pour them in a plastic cup.’
I obviously look like a secret glass bottle carrier, prepared to go to any lengths to keep my glass bottles close at hand.
‘I don’t.’

I wondered how this was going to go.
‘OK.’

She stamped my wrist ICA Theatre in red ink and let me in. I looked at the branding on my arm. I’ve never had a tattoo before, it looked rather hip. Pity it wasn’t slightly more central. 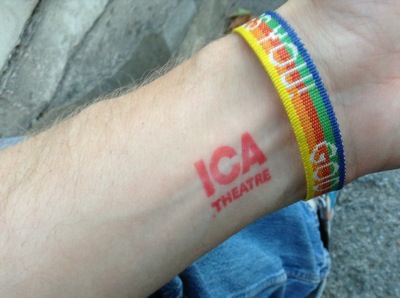 I was at the latest ICA Cinema on the Steps, to see – what exactly I had forgotten, and once I was in the temporary cinema there were no signs or posters. I knew it was Middle Eastern as the whole event was organised by the ICA in association with the Qatar Museums Authority.  It was something to do with refugees, but there are so many places where people have been forced to become refugees that doesn’t really narrow it down. I thought it was Syria, though no doubt the film would make it clear, so I worried not and waited for it to start.

People lounged on the steps, which were already proving to be slightly uncomfortable. I noticed that pros had brought big cushions. I sat at the back near an exit and gave myself top marks for thinking ahead. If the film’s rubbish or it gets cold or starts to snow you want to be able to leg it.

An ICA Punk and chips bag walked in front of me. A police car, siren blaring shot past behind the screen.

Babylon showed up on the screen. So that was what it was called. Then the worrying message:

The authors of the film have chosen not to resort to subtitles.

Not only were there no subtitles, there was no voiceover or titles of any kind. There was no introduction, no explanations, we were just straight into the action. One audience member decided he had had enough and walked out. Large refugee tents were erected. Where? Why? When? No one knew, or if they did they weren’t saying. The film makers weren’t interested in the particularity of the situation. Deliberately not giving any detailed context the film played out as a general essay concerning human displacement. What we were shown could have been happening anywhere.

In fact, I now know that the camp in the film was based in Tunisia and helped provide for people fleeing Libya. The film is a real handheld point and shoot, with the only directorial command appearing to be don’t worry about focus/exposure/framing. Of course it has a subject that means it will find an audience regardless of technique. It feels more like the documenting of a period of time, rather than a film carefully edited to show to other people. It will be important as an historical record, but for an audience it is an unfocused two hour examination of a subject that is not explained.

By the end of the film over half of the audience had left. Was it the fault of the film? I don’t think so. The film-makers Ala Eddine Slim, Ismael and Youssef Chebbi have made a lyrical examination of refugee status, a documentary without the usual strong didactic emphasis. But was it the right film for an outdoor performance where the audience would be sitting on stone steps? No, I don’t think it was.

Cinema on the Steps continues today (Wednesday 21 August) and tomorrow.

More information about the ICA Cinema on Steps