Unless you also like the weather, the food, the language or the architecture there’s no need to go to Italy to see Roman ruins. London has some all of its own. Near the Museum of London and London Wall are the remains of the original Roman fort that was built in Londinium in 120AD.

Granted it is no Pompeii. If you’re hoping for wall paintings, mosaics and obscene signposts then you’re out of luck. What there is, is locked away near the car park at London Wall and only accessible on free Museum of London tours. The fort used to be an exciting two story building that looked like this: 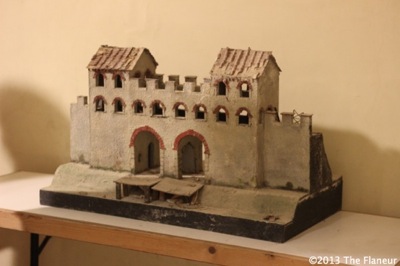 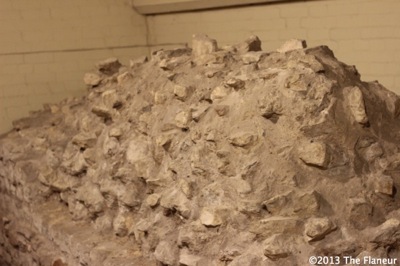 so make sure you take your imagination.

The site is near the Museum of London. Originally it would have been a free standing enclosed fort, but in c200AD it was incorporated into the city walls. It was in the northwest of the city, and its western gateway – which is what remains – would have been used as one of the main entrances to the Roman city. The extra thickening built into the wall when it became part of the city wall is clear to see, as are stones that have obviously been reused from other building projects.

Only the northern tower of the fort remains at all. Large blocks of sandstone have been used at the base, with the walls built up from Kentish ragstone. There are enough stones in situ to give a suggestion of the gateway. There were two arched entrances, with wear in the stones showing the location of huge doorposts and a portcullis. When the fort was discovered in 1956 the archways had been filled with rubble. Today the rubble has been left at the base of one archway, but the other has been cleared to give a better idea of the width of the entrance in Roman times.

If you are trying to get children interested in old ruins so that they will complain less on holiday when you visit Saepinum or Villa Popaea then it might not have the effect you are hoping for. There are not really enough remains to evoke any ‘wows‘ of excitement. However if you are interested in the Roman history of London then this is a must-see.

Tours can be booked via the Museum of London.