Earlier this week, three members of the Pussy Riot feminist art and punk troupe were sentenced to two years imprisonment: Nadezhda Tolokonnikova, Yekaterina Samutsevich and Maria Alekhina. The charge was for public disorder following a performance that saw the troupe enter Moscow’s Cathedral of Christ the Saviour, and perform in protest not only against the Russian President Vladimir Putin, but the political influence of the Russian Orthadox Church. Footage of the incident has had millions of views online, and for months from the women’s arrest to their recent sentencing, the case has attracted an overwhelming amount of press and scrutiny.

It has particularly attracted the interest of very public figures: in particular other musicians. Artists across music genres from pop to hardcore, including Bjork, Madonna, Courtney Love, Patti Smith, Refused and Kathleen Hanna have publicly expressed their support. On an aesthetic level, Pussy Riot has given Riot Grrrl a new platform. Heavily influenced by the punk feminist movement, they’ve shaken awake, and given the spotlight to a genre, whose wildfire heyday has faded somewhat into memory.

It seems that the Pussy Riot case will continue to make headlines. Recent reports indicate that the Russian police are continuing the investigation to find more members of the collective (for those unfamiliar with the case, the Pussy Riot members perform in colourful balaclava’s to conceal their identities.) Reports have begun to seep in that the three sentenced women have begun serving their time suffering harsh treatment from guards and fellow prisoners.

What has sparked this global fascination with this particular case, out of so many in which people are currently being tried in violation of their freedom of action, speech or artistic endeavour? I do not in any way mean to make light of the situation: indeed, I deeply feel for these women. To my own mind, the discomfort church goers may have felt in seeing their church become an impromptu protest site is nothing to what these women, and other members of Pussy Riot still undercover, are suffering now. In terms of what has been done in the name of art, and of protest, the groups actions seem moderate. They didn’t destroy the church. They didn’t hurt anyone. The members have since claimed that they did not seek to offend Orthodox believers. Indeed, the ‘punk prayer‘ performed was to the Virgin Mary, asking her to deal with Putin. Can’t say fairer than that. From a country notorious for it’s corrupt political practices, and underhand violations of human rights, this case has, more than any other in my own living memory, brought into question what is acceptable and unacceptable protest; and whether the state has the right to intervene.

My feeling is, if the Pussy Riot effect continues to snowball, we’ll see some interesting developments in performance. My prediction is that artists will take inspiration from this trial on freedom; I hope in a peaceful and productive way. 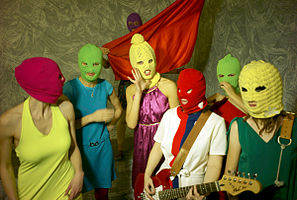 For anyone interested and based in/around London, a benefit is being held for Pussy Riot on 23rd September at Buffalo Bar, 259 Upper St, N1 1RU, featuring live bands, debates and DJ sets, £5 entry