The location of the Serpentine gallery gives it a great advantage over most contemporary art galleries. It is one of the top 10 most visited galleries in London thanks in part to being in Kensington Gardens, the central London park which itself attracts thousands of visitors everyday.

The main building is a former tea pavilion that dates from 1934. The gallery has now expanded into The Magazine, an 1805 munitions building a few minutes walk the other side of the Serpentine lake. Built to house gunpowder during the Napoleonic Wars it is low and squat and has been adorned with a wedding-marquee-in-a-storm of an extension by Zaha Hadid, one of the trustees of the gallery. This adds a cluttered, asymmetrical addition to the west-side of the Grade II listed building that we may grow to love. 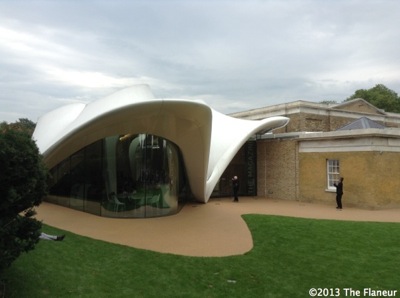 The first show is by the Argentinian Adrian Villar Rojas and has the ambitious title ‘Today we reboot the planet’. The artist has reworked the space and the architecture, which is a strange choice for a first show in a new gallery. As it is the first time that any visitors have seen it, the visitors aren’t aware of exactly what is the gallery and what are the artist’s alterations. When I visited a gallery assistant had been posted on the door to make sure people realised that the brick floor throughout the gallery was part of the artwork. It would have been good to have had a few shows so that viewers could have experienced the architecture and the gallery before bringing in artists to subvert the space.

On entering the gallery you come face to bottom with a large grey sculpture of an elephant.  It is labouring beneath the weight of an architrave on its back. Crushed by the weight, or preparing for the effort to dislodge the fallen architecture, it resonates with unexplained catastrophe.  Villar Rojas’ technique of leaving the clay to dry in the air results in cracks that well describe the elephant skin. 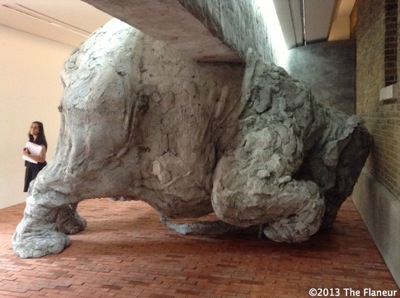 There are two spaces within the centre of the gallery, one of which has been brick floored and left empty. There is a stained glass window in the ceiling, but is this part of the installation or the architecture? The space has a dark Venetian atmosphere, very different to the other room, which has been filled with glass shelves.  These act as the storage area for a sculptor’s studio, filled with items made out of clay, more finished sculptures, found objects, iPods. Up high are a row of pots. Potatoes are inserted into the clay in places, as though a crazed gardener is trying to grow vegetables in apocalyptic soil. Failure will be the only result, as it will be for the sculptures  themselves. Unfired they will disintegrate and will never be shown anywhere else.

It is hard to comment on the Sackler space as to what extent it has been altered just for this show is not clear. It appears that the two central rooms are relatively narrow, as are the walkways around them. However that might be the effect of the artist’s clay interventions. This show lasts until 10th November. After that we will know more about the potential of the Serpentine’s new Sackler Gallery.