When you visit Armenia it is likely that you will see more monasteries then you ever have at home, unless you are a government Inspector of Monasteries or a peripatetic monk. I started with Geghard, one of the most famous monasteries in Armenia. Its previous name of Ayrivank (‘Cave’) Monastery will give an inkling of what makes it unusual and why it is on the UNESCO World Heritage List. 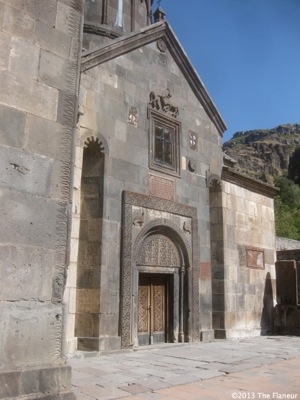 ‘Geghard’ means spear and is named after the spear that pierced Christ’s body. What is said to be the original was kept here from 1250 before being removed to the Echmiadzin museum, although as you might imagine there are quite a few spears around the world with competing claims. A monastery was originally founded on this site a few miles east of Yerevan in 4AD by Gregory the Illuminator, the patron saint of the Armenian Apostolic Church. This was destroyed in 900AD and the current buildings date from 1215, when they were constructed by the Zakarian family.

It used to be called the Cave Monastery as it consists of more than just the visible buildings. It extends backwards into the mountains where it has been carved out of the rock. But this was not created by a few villagers hacking away at the rock on their days off. The Prosh family held the monastery after the Zakarians and they engaged skilled craftsmen to carve out elegant rooms to be used as churches and burial areas. Engaged columns, sculptures and crosses line the walls, but each room has four carved weight-bearing pillars in the centre. It is a remarkable achievement. 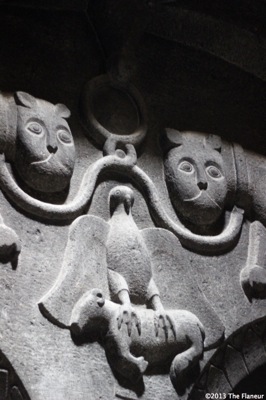 There are several different chapels carved out of the rock face at Geghard, although not all are open to the public.  There are many Khachkars or cross-stones, which are a feature of Medieval Armenian Christian Art. 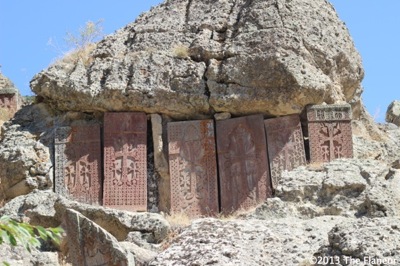 Not everything at Geghard is ancient though. It is also famous for its Gata cake which is sold in the car park, hidden under sheets to keep it out of the sun. This is a sweet bread with a sugary Koritz filling. Made in large circular loaves it looks very impressive. If you need a sugar boost a slice will suffice. 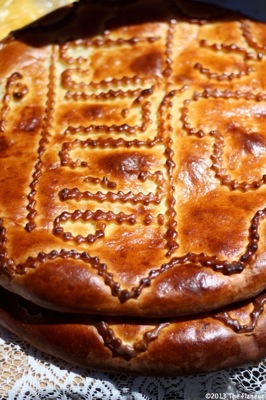 Geghard is one of Armenia’s must see monasteries. It is of a unique construction and set amongst towering cliffs. A visit is easily combined with a trip to the Roman temple at Garni.